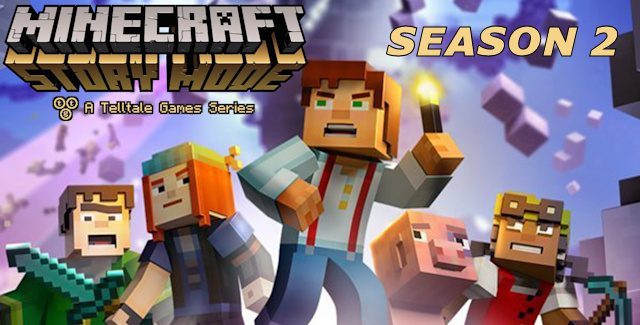 What is the Minecraft: Story Mode Season 2 release date? Everyone’s asking that question, and the short answer is July 11th, 2017! Now let’s go over these rumors and we’ll update this page once it gets confirmed! (Confirmed! “Episode 1: Hero in Residence” was rated June 2nd) – Note that similar to The Wolf Among Us the biggest hint we’re actually getting a Season 2 is the cliffhanger that concluded Season 1’s open ending! Except Minecraft is a successful cashcow for Telltale as well!
Please share your Season 2 ideas in the comments!

Take a look at how the final episode of Season 1 plays out up to the ending here: (The 10-minutes-long cutscene starts at 31:30 minutes & the open ending at 40 minutes.)

We are guesstimating Q4 2017-2018 as the release period of Season 2’s first episode!
Why? Because Season 1 made its debut in mid-October 2015 and it took a full eleven months to wrap up its 8-episode-season, with its notably shorter episodes having the game playtime as most bigger 5-episode-seasons of other Telltale properties. Since the studio is working on so many point-and-click graphic adventure games at the same time (7 series at present, excluding standalone titles like Mr. Robot, a full list is at the bottom of this page). As a result we expect the developers to take a little more time to work on the first few episodes of Season 2, so that they won’t have to rush them out the door; with more preparation having been done before the first episode debuts on a tentative October-December period one (or two) year(s) from the conclusion of its first season in September 2016. This would mean Season 2 gets to keep the same schedule as Season 1, which is what most Telltale series seem to aim for. Delays notwithstanding.

What are the hints for Season 2?

At the end of the Season 1 Finale “Episode 8: A Journey’s End?”, Jesse and crew return home with the help of the Old Builders.

After our team of heroes are back home and layed out all relics from their Season 1 adventures out in front of them, almost immediately the Portal Atlus book from the Old Builder Otto and the Glowing Flint and Steel went missing! Ivor stole them screaming “Hahahaha, adventure!” from a distance, as he heads for the Portal Network, leaving our friends behind. At that point one of the options for Jesse is “We have to catch up!” or “We have to stop him!”, in which case the team run after him.

Presumably our heroes will continue their portal journey.

Up next is an interview with one of the Telltale staff about Minecraft: Story Mode:

June 5th 2017 Update: Minecraft: Story Mode’s Season 2 has been confirmed by an early listing on the Australian ratings board’s website. With Episode 1 being submitted worldwide on June 2nd to be rated, this means Episode 1 is coming soon in 2017!! 😀 According to the listing the first episode of Season 2 will be titled “Episode 1: Hero in Residence”.

June 7th 2017 Update: Telltale has made Minecraft: Story Mode – Season 2 available for pre-order with the first episode coming out on July 11th, 2017 for Xbox One, PlayStation 4, PC, Mac, iOS, and Android devices!

The official Season 2 description reads: “Jesse’s saga continues in five all-new episodes created in collaboration with Mojang and members of the Minecraft community. Your choices from season one will carry over, but newcomers will be able to jump in no problem. This season also includes our ‘Crowd Play’ feature, which lets your friends and family play along with you by voting on story choices from their phones. Here’s a little more about what’s in store this season:

Now that Jesse and the gang have vanquished the Wither Storm, saved the world, and become totally super famous heroes, life has gotten a bit more…complicated. With more responsibilities and less time for adventure, old friendships have started to fade — at least until Jesse’s hand gets stuck in a creepy gauntlet that belongs to an ancient underwater temple. Together with old pals and new comrades alike, Jesse embarks on a brand new journey filled with tough choices, good times, and at least one temperamental llama.

This season will feature voice work from Patton Oswalt, Catherine Taber, Ashley Johnson, and Scott Porter, as well as cameos from Stampy Cat, stacyplays, and other personalities from the Minecraft community on YouTube.”

July 6th Update: Telltale has released the first Season 2 trailer ahead of the first episode release on July 11th.

The video is below, its description reads: “A new adventure beckons, sending Jesse on a quest to the darkest depths of the world – and beyond! Joined by a motley band of familiar faces, fortune hunters, sometime enemies and one deeply disobedient llama, there will be tough choices, peril aplenty and no shortage of People Who Will Remember That.”

Update: Any future project updates will be added in this section.

What do you want to see explored in Minecraft: Story Mode Season 2?