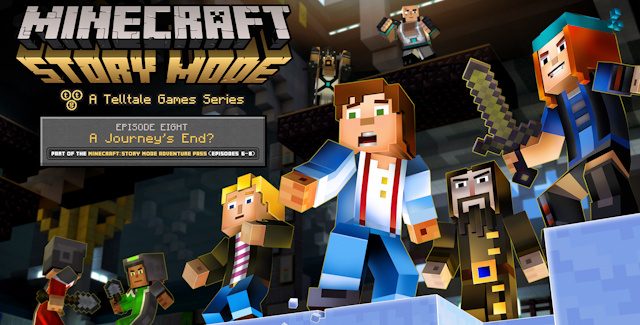 The Minecraft: Story Mode Episode 8 walkthrough for “Episode 8: A Journey’s End?” will guide you through the beginning to ending moments of gameplay with strategy tips for this graphic adventure game on the PC, Mac, Xbox 360, Xbox One, PS3, PS4, PS Vita, Wii U & Mobile (iOS and Android-based devices).

Pricing: A Journey’s End? continues the add-on series of three post-season adventures, which can be purchased digitally as part of the new Adventure Pass for $14.99 and includes access to Episodes 6, 7 and 8 as they release. The episode will also be available individually for $4.99 USD. Players will need to own at least Episode 1 in the series or the season pass disc in order to purchase Episodes 6, 7 and 8.

RabidRetrospectGames will be your guide showing you around the game’s areas per chapter.

Synopsis: So what are our heroes up against in this concluding chapter of the season? In Episode 8: ‘A Journey’s End?’ Jesse and crew continue their portal journey in search of home. With Harper leading them to the world of the Old Builders, Jesse and crew finally have their chance to return home… but it won’t be easy, and the stakes are high. You’ll need to take on opponents in a series of gladiatorial games to win your freedom, save your friends, and maybe, just maybe, make it back to your own world!

The all-star cast gets two more new additions for Episode 8: ‘A Journey’s End?’, with Jim Cummings (Winnie the Pooh, Darkwing Duck) as Hadrian, the leader of the Old Builders; and Kari Wahlgren (Rick and Morty, The Fairly OddParents) as Mevia, the Enforcer.

Note: Your path in ‘A Journey’s End?’ will differ greatly depending on your choices made in prior episodes, so more than one playthrough is definitely recommended! You will have completely different experiences depending on where you’ve decided to go!

Get your friends out of the mines.

Chapter 3: “Challenge: Accepted”, Chapter 4: The Most Dangerous Game, Chapter 5: Gaming the System & Chapter 6: To the Victor Go the Spoils (Ending)

Get ready for the final part of Season 1’s adventure.

Overview for all Alternative Choices in Minecraft: Story Mode Episode 8 “A Journey’s End?”:

Alternate Choice: Between saving Nell and letting Nell die, choose to don’t save her and beat Em.

Next Episode: Please join our “Minecraft: Story Mode Season 2 Release Date” discussion about what will happen next season.

Thanks to Telltale Games, Doug, RabidRetrospectGames & Gamerzombie for the walkthrough videos.