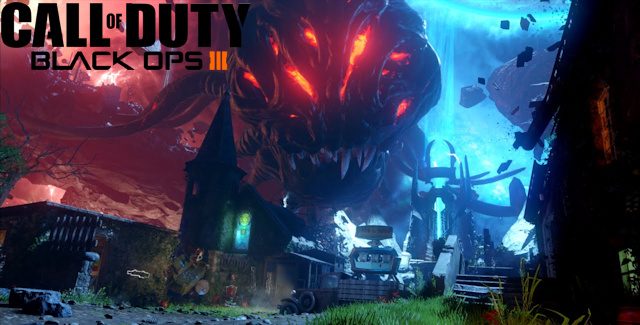 The Call of Duty: Black Ops 3 Salvation trophies guide lists every trophy for this PS4 first-person shooter game DLC #4 and tells you how to get and unlock them all.

In the Call of Duty: Black Ops 3 Salvation trophy guide we’ll show there are 9 Trophies (2 Hidden) that can be earned in the PS4 version. Earn Bronze (7) and Silver (2) Trophies to increase your Gamer Level.

Tip: How to complete all below-listed Challenges the game gives you on the Revelations map, including how to trigger them, is explained in detail in our “Call of Duty: Black Ops 3 Salvation Revelations Guide” that shows step-by-step how to get all trophies on your way to the ending.

1. Pack-A-Punch-ectomy (Bronze) — In Revelations, recover the Pack-a-Punch machine from its abductor.

Location: After you explore & open up the Revelations Zombies map, override the 4 Corruption Engines (at the back of the squid-skull-like altars) around the map. At a cost of 500 each, you’ll bring the power back on on the entire map.

After overriding all 4 Corruption Engines, return to the “Nacht der Untoten” map area and walk up the staircase to find a panel with a green screen and 4 lit green lamps next to it, indicating the power is on. Next, wait until the Apothicon Gate Worm that’s flying across the map crosses paths with the “Nacht der Untoten” section you’re standing in. When it’s right in front of you turn on the green panel and the electricity from the panel will electroshock the worm stay there & to open its mouth. Now you can enter it by walking into its mouth to be brought to its stomach, since the worm was the one who ate the missing Pack-a-Punch machine.

Tip: Once you arrive in the belly of the Apothicon Gate Worm beast, shoot at the yellow parts that connect the stomach to the walls and the stomach will fall down, open up, and drop the Pack-a-Punch machine out for you to use here permanently, at a cost of 5,000 each time. – Walk up to the machine to trigger the trophy.

2. Keep Close (Bronze) — In Revelations, assist a Keeper in defeating every type of enemy.

How To Get A Keeper: After picking up all 3 Summoning Altar Pieces (which can spawn at multiple different spots) you build the Summoning Altar, which unlocks the Keeper Protector for use in-game. The Keeper is incredibly useful to advance in rounds quickly. He will kill zombies and also revive you if you go down!

– Summoning Altar Piece 1 Location: The Keeper skull can be found in the “Verruckt” section of the map. It’s either in a storage rack right of the perk machine or up the stairs in a wooden wheelchair at the house entrance.

– Summoning Altar Piece 2 Location: The Pink Gem can be found in “Der Eisendrache” (Kino) section of the map. It can be in the stone rubble next to the pyramid. Or go past the pyramid towards the Crypt and look on the ground right of it. Sometimes it’s also on a table next to the blue jump pad that’s near the derelict theater.

– Summoning Altar Piece 3 Location: The Red Flag can be found in the “Origins” (Mob of the Dead) starter area of the map. Look for it on the sandbags in front of the staked-through up-in-the-air zombies. Or it can appear in the Cafeteria right of the perks machine. Alternatively you may find it in multiple spots around the blue-gems-stuck-in-rocks area.

After finding all 3 parts you must craft the Altar at “Der Eisendrache” section of the map in the back of the derelict theater (look for the circular stone wheel on the wall left of the mannequins), and then you can summon a Keeper for 5,000 points.

Tips: All these enemies can be found inside the Apothicon. Once you spot a type of enemy you need, shoot one bullet without killing each enemy to count as assisting your Keeper. Next, assist the summoned Keeper in defeating every type of enemy:

3. Death Ray (Bronze) — In Revelations, kill 40 enemies with a single activation of a Corruption Turret.

Tips: This only works in higher rounds. Round 35+ is recommended. It’s easier with 4 players because the zombies will spawn faster and in greater numbers.
Using a turret costs 2,000 points. There are 4 Corruption Engines that can be overridden and each one of them turns into a turret. These turrets can be used as often as you want, but they do have a cooldown on them.

I found the one on “Der Eisendrache” to be the safest (enemies can only spawn in front of you here). Just make sure you don’t have low gravity enabled as it will slow down the zombies.
The turret stays active for exactly 20 seconds. During one single activation you must kill 40+ zombies! The problem is that there can’t be 40 on the map at the same time. The video example shows in round 42 only 25 zombies spawned at once. The trick is to lure them together, then kill them with the turret. More zombies will spawn and you must shoot them very quickly. They only respawn fast enough in higher rounds.

A viable strategy with 4 players is to have everyone collect zombies in a different area. Then everyone brings their zombies to the same turret.

4. The Grand Tour (Bronze) — In Revelations, visit every unique location within 2 minutes.

Tips: Time to do a speedrun across the entire map. The creature’s belly (Pack-a-Punch area) is not required for this. You can walk around the map in a big circle. You also need to override at least one Corruption Engine to teleport to a “hidden” area.

Note that if you completed all 4 Corruption Engines (locations listed in the “Pack-A-Punch-ectomy” section above) you can use the portals to teleport from one area to the next.

Tips: You must wear 3 different hats in one match! When you start a new match the progress will be lost and you have to get all 3 again. The hats also give you upgraded purple perks which makes them very useful items. – Here are the easiest three you can get relatively early on:

– Hat #1: Wolf Hat — Go to the “Der Eisendrache” part of the map (with the pyramide) and turn on anti-gravity by standing on the four tiles on the floor. Now throw a grenade at the wall opening near the pyramide. A skull will fall down. Feed the skull by killing zombies near it. You will hear an audio cue when it’s done. Get the hat from the “Kino der Toten”. It’s on one of the mannequins.

– Hat #3: Summoner Hat — Build the Summoning Altar (Part locations shown in the “Keep Close” section above), then summon a keeper and let it kill 20+ zombies. When you hear the audio cue the hat will show up on a mannequin in “Kino der Toten”.

– Hat #4-etc: There are much more than 3 hats / masks. More hats can by unlocked by killing certain amounts of each enemy type. For example: Killing many Margwa’s will give you the Margwa hat.

6. Wonderful (Bronze) — In Revelations, kill 10 enemies in one shot with each wonder weapon.

Tips: You need to kill 10+ enemies in one shot with the “Thundergun” and “Estulla Astoth” wonder weapons. Both of them are obtained randomly from the mystery box.
Please note that there are much more wonder weapons than that, but you only need these two for the trophy! The original trophy description is either wrong or the trophy is glitched in a good way. The other wonder weapons can safely be ignored for this.

The Thundergun and Estulla Astoth do massive AOE damage. Round up some zombies (works good in starting area) and kill 10+ in one hit. This has to be done in one match.

Important Co-Op Info: when someone else gets the wonder weapon you can no longer get it from the box yourself (only if the other player puts it back into the box). In co-op it’s possible to trade weapons if you unlocked the weapon switch table. Unless you have a good team it’s recommended to do this solo. With randoms you run the risk that they get a wonder weapon and you get locked out of getting it.

7. Controlled Chaos (Bronze) — In Revelations, override all of the Corruption Engines before round 6.

Tips: Use your knife and pistol in early rounds to get lots of points. Activate the Corruption Engines (locations listed in the “Pack-A-Punch-ectomy” section above) as you come across them and open all doors. Don’t waste your points on perks. A shotgun is all you need.

After activating a Corruption Engine you must stay alive for a few seconds. Lots of enemies will spawn. You can either run in circles and avoid them, or use the shotgun to one-hit kill them (this is safer). Each engine costs 500 points to be activated. It’s far easier with multiple players because everyone starts out with 500 points, allowing you to open more doors right away.

8. For The Good Of All (Silver) — In Revelations, the [Summoning] Key must be opened.

9. A Better Tomorrow (Silver) — In Revelations, complete the cycle. [The Super Easter Egg.]

Special thanks to Activision, MrDalekJD, Powerpyx & ThePegiGames for the list, tips & guide videos.

Please comment if you have any Call of Duty: Black Ops 3 Salvation trophy unlock tips of your own. Kudos will be given. – Thanks for visiting!