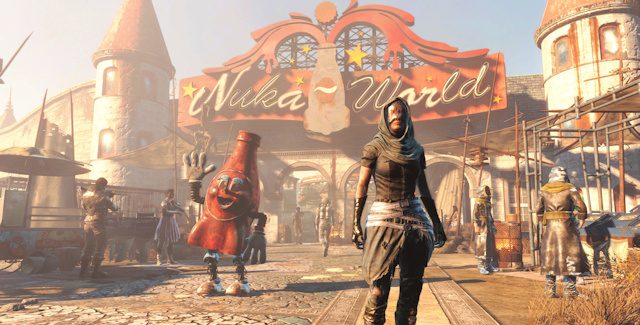 The Fallout 4: Nuka World achievements guide lists every achievement for the final Xbox One & PC action-RPG game DLC and tells you how to get and unlock them all.

In the Fallout 4: Nuka World achievement guide we’ll show there are 10 Achievements (0 Secret Achievements) with a total of 170 Gamerscore points to earn in the Xbox One and PC versions.

Tip: Collect all 5 issue of Scav! Magazine with the video guide below.

Tip: Outside of the 5 already available flavors, collect all 15 hidden Nuka Cola Recipes to create at the Nuka Cola mixer with the video guide below.

Note: If a specific Nuka Cola Recipe isn’t at the indicated spot — and you haven’t picked it up already (check your Misc menu to see) — then it could be that an attack like an explosion in that area moved it around away from the spot, so check around the area to find it.

Tip: Talk to Shank to Run Jobs in the Commonwealth. The target being to establish 8 Raider outposts (and unlock the Tribute Chest in the process). The following video guide shows how you can claim outposts for your gang. You can do this one at a time by cleaning out 8 Raider Camps with The Pack.

5. All Sugared Up (20G) — Defeat 40 Nuka-World Creatures whilst under the effect of any Nuka-Mix flavor.

Location: The Nuka-Cade is located in Nuka-Town USA, just north-west of The Parlor on your Pip-Boy Map.Just outside of the Nuka-Cade building there’s a red Token Dispenser machine that exchanges 1 Pre-War Money for 3 Nuka-Cade Tokens. Now go into the Nuka-Cade theme park arcade and walk straight forward past the reception desk & Bottle sign up to the large red Cappy sign. In front of it is a Nuka-Cade Prize Terminal where you can exchange / redeem your tickets for prizes.

Tickets Farming Tip: Nuka-Cade tickets can be won from games located in the Nuka-Cade as well as other areas of the park. You can also find sets of a dozen tickets in trash cans & in 750-1,500 blue ticket rolls around the park. Of course you want to get to a 100,000 tickets ASAP! To gain around 1,000 tickets per game, only play Bandit Roundup with the Spray n’ Pray weapon (or Kiloton Radium Rifle) that’s an automatic weapon with the Explosive Legendary effect on it. After you put in a token you can easy hit all targets due to the massive explosion that even hits the target if you don’t shoot it straight-on and costs you less than 100 ammo per game to complete. (Alternately you can use the Ripper chainsaw weapon and jump over the ticket port to hit 100% of all targets up-close for the same reward.)

Please comment if you have any Fallout 4: Nuka World achievement unlock tips of your own. Kudos will be given. – Thanks for visiting!