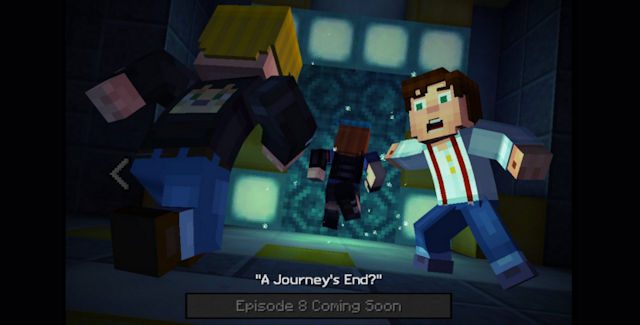 What is the Minecraft: Story Mode Episode 8 release date? Officially it’s set for Summer 2016. On average Telltale Games has released the Minecraft Episodes 1-4 in a much more rapid monthly fashion than their other episodic games — but Episodes 5-7 took way longer at 7-14 weeks due to the prep for the newly announced Episodes 6-8 (the longest adventure season yet). The season’s final downloadable episode, “Episode 8: A Journey’s End?”, will arrive September 13th, 2016 on PC/Mac, PS4, Xbox One, PS3, Xbox 360, iOS and Android. Wii U & PS Vita releases arrive later.

Check out the Episode 6 ending that has the Episode 8 preview in this video: (skip to 20:15 minutes to watch)

Episode 8 Synopsis: “Next time on Minecaft: Story Mode…
Jesse: Right back where we started.
Lucas: Is it weird that I’m happy to see this place again?
Jesse: Yeah it’s pretty weird. This place makes my skin feel all prickly.
Lucas: Well, I’m just excited that we’re going home. That’s what I’m trying to focus on.
Harper: Now when we built this place, we also made something that sorta acts like a compass-slash-map-slash-navigator… We called it “The Atlas.” It helps chart routes between the worlds.
Petra: And… you have this Atlas, right?
Harper: Uhhh… No. No, I don’t. But! I know who does!
Petra: Ughhhh. Lukas: Huh. Guess I should’ve seen that coming.
Jesse: So wait – you can’t get us home?!
Harper: Okay, okay, no. I might not be able to get you home, but I do know where to get the Atlas. Don’t you worry! We’ll just go right in, ask for the Atlas, and then you’ll be home. No muss, no fuss… Easy.
Petra: Funny. Whenever someone says that my instincts start screaming “danger.”
Harper: In order to find the Atlas… we need to track down the rest of the “Old Builders.” Still don’t like that name.
Jesse: How do we find them? Which portal do we go through?
Harper: Oh, you don’t have to go through another portal. What you’re looking for has been right here the whole time. And there you go. All it’s waiting for is the key. That’s the Heart.
Jesse: Whoa…
Harper: The answers you’re seeking… the Old Builder’s Atlas… your way home… They’re all right up those stairs.
Ivor: …Adventure?”

As the New Order of the Stone, Jesse and his/her friends must help and lead the world as role models. Three all-new adventures that will continue as post-season episodes set to release in the summer of 2016.

The Episode 8 chapter names hint at what events to expect:
• Chapter 1: Let the Games Begin
• Chapter 2: Playing for Keeps
• Chapter 3: Challenge: Accepted
• Chapter 4: The Most Dangerous Game
• Chapter 5: Gaming the System
• Chapter 6: To the Victor Go the Spoils

The Episode names may hint at overarching story themes:
• Episode 1: The Order of the Stone
• Episode 2: Assembly Required
• Episode 3: The Last Place You Look
• Episode 4: A Block and a Hard Place
• Episode 5: Order Up!
• Episode 6: A Portal to Mystery
• Episode 7: Access Denied
• Episode 8: A Journey’s End?

Update September 7: Episode 8’s release date has been confirmed for September 13th, 2016. To quote Telltale: “Today we can announce the release date for the eighth episode of Minecraft: Story Mode, plus two special guest stars!

The third and final episode in the ‘Adventure Pass’ add-on series, Episode 8: ‘A Journey’s End?’ will be available digitally worldwide starting Tuesday September 13th on PC/Mac, PlayStation 4, Xbox One, PlayStation 3, and Xbox 360. It’ll be available the same week for compatible iOS devices via the App Store, and for compatible Android devices via Google Play and the Amazon Appstore; and will also be coming to the Windows Store.

So what are our heroes up against in this concluding chapter of the season? With Harper leading them to the world of the Old Builders, Jesse and crew finally have their chance to return home… but it won’t be easy, and the stakes are high. You’ll need to take on opponents in a series of gladiatorial games to win your freedom, save your friends, and maybe, just maybe, make it back to your own world!

The all-star cast gets two more new additions for Episode 8: ‘A Journey’s End?’, with Jim Cummings (Winnie the Pooh, Darkwing Duck) as Hadrian, the leader of the Old Builders; and Kari Wahlgren (Rick and Morty, The Fairly OddParents) as Mevia, the Enforcer.”

Future Updates: This section is reserved for future updates like the Episode 8 trailer.