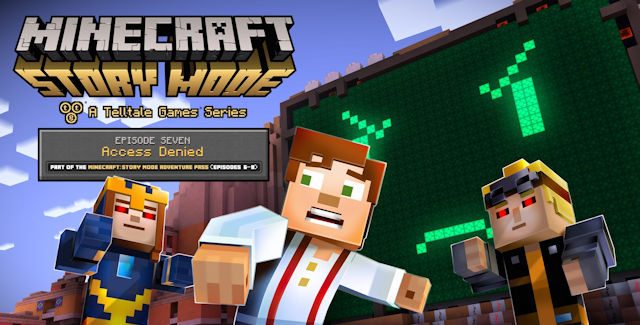 The Minecraft: Story Mode Episode 7 walkthrough for “Episode 7: Access Denied” will guide you through the beginning to ending moments of gameplay with strategy tips for this graphic adventure game on the PC, Mac, Xbox 360, Xbox One, PS3, PS4, PS Vita, Wii U & Mobile (iOS and Android-based devices).

Pricing: Access Denied continues the add-on series of three post-season adventures, which can be purchased digitally as part of the new Adventure Pass for $14.99 and includes access to Episodes 6, 7 and 8 as they release. The episode will also be available individually for $4.99 USD. Players will need to own at least Episode 1 in the series or the season pass disc in order to purchase Episodes 6, 7 and 8.

Synopsis: What awaits our heroes in this next adventure? In Episode 7: ‘Access Denied’, continuing their portal journey in search of home, Jesse and crew land in a world entirely controlled by PAMA – a sinister “thinking machine” determined to command everyone and everything in pursuit of optimal usefulness and efficiency. Forced on the run to avoid capture and assimilation, you’ll need to work with a new ally to defeat the corrupted computer and free the population it has enslaved.

Note: Your path in ‘Access Denied’ will differ greatly depending on your choices made in prior episodes, so more than one playthrough is definitely recommended! You will have completely different experiences depending on where you’ve decided to go!

Get ready for the final part of this oppressive computer adventure.

• Did you make Petra angry in the Portal Hallway?
• What did you tell PAMA about how you found this world?
• Which friend did you unchip first?
• Which potion did you choose to clear a path to PAMA?
• Did you defend Harper?

Next Episode: Please join our “Minecraft: Story Mode Episode 8 Release Date” discussion about what will happen in Episode 8.

Thanks to Telltale Games & Gamerzombie for the walkthrough videos.