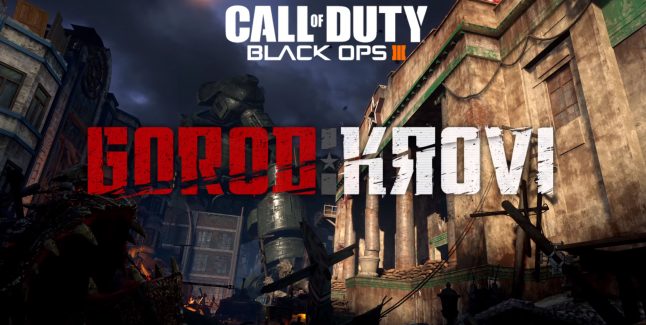 Gorod Krovi is part of the Descent package for Call of Duty: Black Ops 3, the third of four Zombies maps that tie together a new storyline from its Black Ops 1 origins.

This is a full guide to complete the Gorod Krovi zombies map. 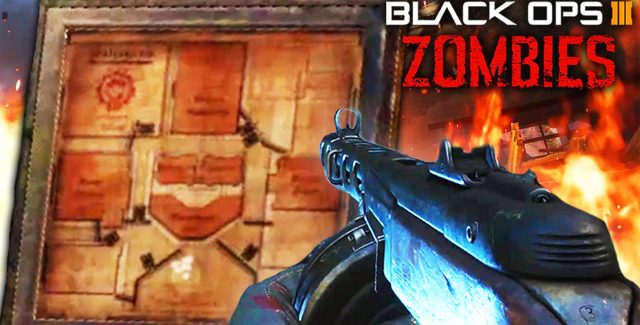 It is the third installment in Zombies’s four-part episodic narrative driven by four returning characters. Namely, the story is told through the eyes of these four: Sergeant Nikolai Belinski, Doctor Edward Richtofen, Captain Takeo Masaki, and Corporal “Tank” Dempsey.

• Doctor Edward Richtofen Bio:
Nationality: German
Affiliation: Group 935
Info: In a former life, the sadistic Doctor Edward Richtofen stood at the forefront of research into the mysterious Element 115 – and its potential applications for Group 935’s Wonder Weapon program. Now, his grand plans for a brave new world guide him down a dangerous path toward an uncertain future…

• Captain Takeo Masaki Bio:
Nationality: Japanese
Affiliation: Imperial Japanese Army
Info: Captain Takeo Masaki comes from a noble family that has dutifully served the Emperor for decades. After the events of Der Eisendrache, Takeo’s unwavering sense of loyalty will be tested as he fights alongside Tank, Nikolai, and Richtofen in their quest to secure a better tomorrow.

• Corporal “Tank” Dempsey Bio:
Nationality: American
Affiliation: American Marine
Info: Corporal Tank Dempsey, American Hero. Originally assigned to intercept Dr. Edward Richtofen in Northern France, Dempsey now fights alongside Nikolai, Takeo, and Richtofen as they attempt to put an end to the enemy war machine once and for all. Though he’s seen more than his fair share of bloodshed, nothing could have prepared him for the events of Der Eisendrache, Zetsubou No Shima and Gorod Krovi…

Here’s how to get started in Gorod Krovi:

Intro: Call of Duty: Black Ops III’s Zombies saga continues in the 1940s Soviet Union’s “Gorod Krovi”. Follow Origins heroes Dempsey, Nikolai, Richtofen, and Takeo as they face-off against a swarm of mechanized zombie infantry and dodge hell-fire from aerial dragon assaults, all in the middle of a raging battle within the remnants of Stalingrad. Gorod Krovi delivers the most exciting Zombies experience yet, filled with horrifying new enemies, exciting new gameplay mechanics and an epic set of Zombie annihilating weapons.

Tip: Get a good team together of players you can rely on to revive and support you. Good team work is the key to success in Zombies mode. — Still looking for other co-op players? Leave your online username/gamertag in the comments section below and let people know you’re a team player. It’s fun to make new friends. 🙂

Let’s begin the guide by showing you the first 10 minutes of zombie encounters as an intro to the video guide.

It shows an overview of the map so you know how to survive when you first play it and get your bearings. You can find the challenge gravestones in the spawn room for easy access, and the map has its own set of four challenges to complete. As for Perks, you can find the first Perks machine with a set location (they do not move) after you open the first door and go into the building’s second floor; It will reliably give you Juggernog. Open a few more doors to grab a power switch and the dragon command area to turn the power on.

Item Location Tip: The in the previous COD game so-called 3D Printer & Weapon Upgrade Stations are now called the Mystery Box & Pack-a-Punch Stations, respectively. These locations are also indicated on the in-game map with a questionmark box/square & up arrows/triangle.

UP NEXT: A full Gorod Krovi walkthrough up to the ending!

Here are all the steps to take to finish the Gorod Krovi easter egg puzzle:

TUTORIAL #1: Where To Get The Juggernog Perk & How To Turn On The Power Locations Guide:

The Juggernog perk can be obtained after turning on the power. It is always in the same spot. As well as the mentioned power generator location on Gorod Krovi.

• A short guide showing you how to find the Jug perk machine and the power switch in Gorod Krovi.

TUTORIAL #2: How To Build The Guard of Fafnir Dragon Shield:

Note: Currently there are severe loading issues, causing some shield parts to become invisible (you can pick up invisible parts anyway, they are just harder to find).

• When you have all 3 Dragon Shield Parts you must build the shield at the workbench inside the Operations Bunker.

How to unlock Dragons & reach Pack a Punch area:

– Step 1: Activate the power switch (easy, just open a few doors to get there).
– Step 2: Now zombies will randomly drop cylinders. Get one of those.
– Step 3: Insert cylinder in the corresponding groph module. There are 3 total. Each cylinder matches one groph module.
– Step 4: A drop pod will now fall from the sky. Look for a green beam in the sky to find it (random location). Get there quickly and defend it from zombies! The pod must be charged by killing zombies near it. Then it will open up and give you a circuit part (you need all 3 circuits from 3 pods).
– Step 5: Get 2nd cylinder (random drop), insert it in corresponding groph module and defend second pod.
– Step 6: Get 3rd cylinder (random drop), insert it in corresponding groph module and defend third pod.
– Step 7: Bring all 3 circuit parts to the underground lab. You can insert them here.
– Step 8: The dragon platforms are now active! Go to a dragon platform and activate it for 500 points to summon a dragon. The dragon will bring you to the Pack-a-Punch area where you can upgrade your weapons and also trigger a Lockdown Event.

• A full guide showing you how to get to a Pack-a-Punch chest in Gorod Krovi. The PaP is hidden behind a series of steps that must be completed before you can ride a dragon and access the secret bunker which contains the upgrade machine.

TUTORIAL #4: How To Activate The Gigant Beam Trap:

First you must turn on the power. Just open the doors and go to the power switch (see above for that tutorial).

Next head to the Supply Depot area. It’s only accessible after activating the power. There’s a trap for 1500 points called “Gigant Eye Beam”. With one activation of this trap you must kill 20 zombies. The trap stays active for 30 seconds.
You can do this as early as round 6 or 7. Just run around the room in big circles to lure in enough zombies. When you have 20+ running after you it’s time to activate the trap. Hide behind the light beam and the zombies will walk right into it.
Note: If you don’t get it on the first try you can activate the trap again (one round cooldown time).

TUTORIAL #5: How To Activate The Lockdown Event:

First you must ride a dragon to the pack-a-punch machine. If you don’t already know how to do that, use the video guide above.

In the pack-a-punch area there’s a crystal. Interacting with it will trigger a lockdown event. Here you must defend yourself from multiple waves of enemies. You will face normal zombies, lots of robots and drones.
Make sure you come very very well prepared. You cannot buy any ammo or perks here (even the pack-a-punch will be unavailable during lockdown)! The fight lasts for about 4 rounds and the enemies here don’t give you money. I highly recommend the GKZ-45 Mk3 from the mystery box. With it you can camp on the upper floor and create black holes that will suck in the enemies. The upper floor is the best place to camp because enemies can only come from one direction.
Ammo preservation is very important here. Also bring at least 5000 points so you can use the Pack-a-Punch before interacting with the crystal. When all enemies are dead the lockdown will end. Now you can pick up the Dragon Strike Controller from the Crystal (which you will need for the “Fire Mission” trophy / achievement).

TUTORIAL #6: How To Get The Dragon Strike:

Just follow the above videos if you don’t know how to get here, they will show you all steps and walk you through the full lockdown (solo).

After completing the lockdown event you can pick up the “Dragon Strike Controller” in the Pack-a-Punch room. Now go downstairs and exit this area via the sewers. You can only use the Dragon Strike outside! Run in big circles to get enough zombies. Then press D-Pad Right to place the Dragon Strike. The zombies will automatically run into it and stay in place (just like monkey bombs). A dragon will come and kill the zombies.
Because the zombies are automatically attracted by this weapon it’s quite easy to kill 8 at once. The only hard part is getting this item.

EASTER EGG STEP 1: How To Get Started & Trophy Locations 1-4 Guide:

Finding the start of the main Easter Egg quest and lists the requirements to complete it.

• Step one involves finding 4 of the 6 Trophy locations on the map — that are needed before the Sophia password — which can take hours without this 4-minutes-short video guide.

EASTER EGG STEP 2: Where To Find The Dragon Egg & How To Unlock The Gauntlet of Siegfried & The Sophia Password:

• Step two shows you how to find the Dragon Egg in Gorod Krovi, essential for claiming the hidden specialist weapon Gauntlet of Siegfried and progressing the main Easter Egg.

The next part of this step reveals Gersh’s return and that the Sophia password from top to bottom is: KRONOS

This 100% easter egg completion guide continues the above Challenges to get all Trophies to the end, at 9 minutes in.

Here’s a look ahead at what happens after you find all Trophy locations on the map, turn all the valves, do the challenges & go to Sophia. Then you get to do the full boss fight that leads to the ending.

There you go! You will soon have all the details you need to complete the hidden Easter Egg puzzle in the new Gorod Krovi map.

Big thanks to Activision, MrDalekJD, AcceleratedIdeas & Powerpyx for the discoveries on launch day!