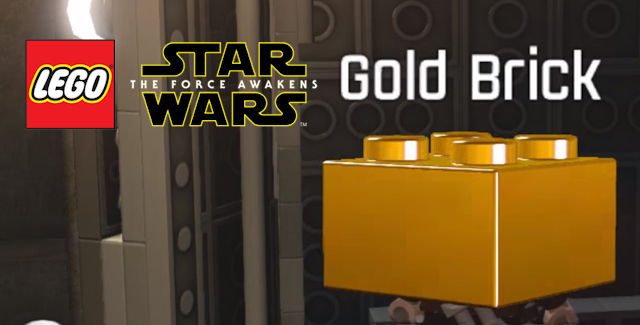 As a bonus, finding all 250 Gold Brick locations, and picking up these shiny yellow/gold colored LEGO bricks, will help towards unlocking the New Star Wars Adventure Bonus Levels and getting 100% completion.

The Timeline for all these in-game Gold Bricks locations is listed below.

Tip: Go and buy the “Collectible Detector” Red Brick first. It’s already unlocked automatically from the start, you can buy it for 500,000 studs, since there is no cheat code to get it faster. It’ll make it a lot easier to find all the remaining Gold Bricks when they are being pointed out to you with an on-screen yellow arrow.

Where to find all Gold Bricks in Lego Star Wars: The Force Awakens? The in-game collectibles locations for the Gold Bricks are described in these detailed video guides.

The Gold Bricks are listed in the video in the order that they appear through normal progression in the 5 open world HUBs.

Huge thanks to Trophygamers, AFGuidesHD & Joe for the gold brick location guide videos and tips.

Please check our at the top listed Lego Star Wars: The Force Awakens guides for tips to find 100% of the collectibles.

If you have any questions or tips about Gold Bricks, please comment below and we’ll give you credit for your finds! – Thanks for visiting!