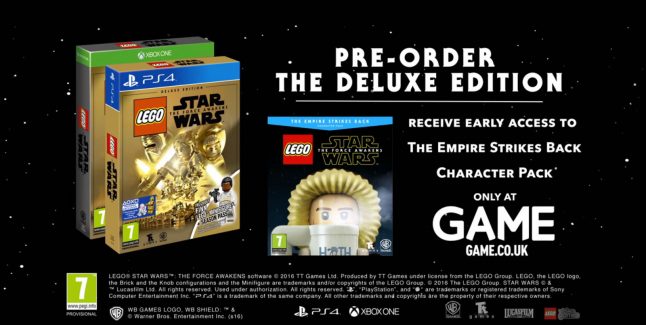 Here’s an overview of all Lego Star Wars: The Force Awakens pre-order bonuses.

• Season Pass owners as a bonus get exclusive access to The Jedi Character Pack. Which will be available at launch, from June 28th 2016. The Season Pass is only available at $10 / €10 on PlayStation 4, PlayStation 3, Xbox One, Xbox 360 and Steam (Windows PC). Wii U gamers are left in the cold.

The Jedi served the Republic for over a thousand generations as the guardians of peace and justice. And now they can serve you in LEGO Star Wars: The Force Awakens with the Jedi Character Pack! Purchase the Season Pass for this exclusive character pack to get powerful members of the Jedi Council in Mace Windu, Plo Koon, Kit Fisto, Ki-Adi-Mundi, Saesee Tiin and Shaak Ti, as well as Jedi Generals Aayla Secura and Luminara Unduli.

Are you excited for Lego Star Wars: The Force Awakens?