Trials of the Blood Dragon Walkthrough 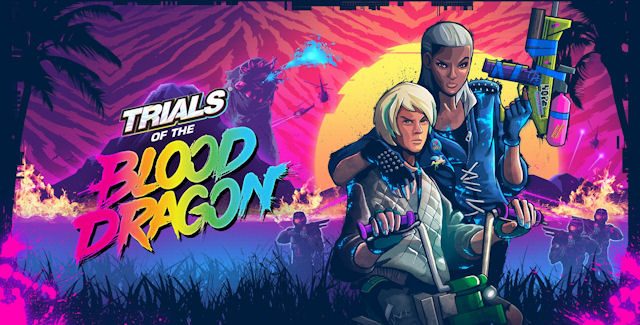 The Trials of the Blood Dragon walkthrough will guide you through the beginning to ending moments of gameplay with A+ Grade scoring strategy tips for the story levels in this wacky 80’s sci-fi platform racing game on the PS4, Xbox One & PC.

Let’s start the Trials of the Blood Dragon walkthrough with an introduction video!

Please note that viewers must be at least 16 to watch, so no harm comes to those with innocent eyes. This game includes Violence, Blood, Suggestive Themes, Drug Reference, Language.

Index of Trials of the Blood Dragon Guides:

Trials of the Blood Dragon Walkthrough

2019 – NOW
In a world where Blood Dragons, beasts of unknown origin, roam free.
In a time where the future is not what it used to be, there’s a man.
No, wait..
There’s a boy.. and a girl.. Yes, a boy and a girl.
They are Roxanne and Slayter, the offspring of the legendary Rex Power Colt. They‘re as tough as their father, as smart as their mother and the best there ever was at being the best. 12 years on from Vietnam War 2, they’re going to Vietnam War 4 to save the day, save freedom, and save the world.

Discover an epic single player experience with the unique combination of competitive, precise, physics-based Trials gameplay- and rather less precise gun toting, balls swinging, neon-drenched Blood Dragon action. Journey through a colorful story with warzones in Vietnam, settling scores in Miami, confronting TV heroes in Tokyo and the odd detour into Space. Hell, you’re gonna go to Hell and back. The future is back. Are you ready?

Level 1: Leave No Man Behind

Welcome to the Trials of the Blood Dragon A+ walkthrough!

TravaX will be your guide showing you through the game’s tracks.

Objectives:
• Make your way to the prison.
• Time to free POWs from the Commies’ grasp.

Hack to Slash is the second track featured in the game. The secret behind getting the A+ score on this track is to always be running in the walking segment, although being fast in the bike segment also helps a bit. Try to make some of the jumps shown in the video guide, normally those save a few seconds off your time.

Objectives:
• Retrieve Intel to ID what’s powering the region.
• Biking isn’t everything in life, you know.

Hornet’s Nest is the third track featured in the game. Somehow, this run has the world record on the PS4, the best time saver on the track is the one at 1:06. Instead of shooting the rock just jump to where the guy is standing, don’t bother shooting him as the impact of the bike will kill him instantly. The last time saver is in the end at 2:25, instead of accelerating and falling on top of the tubes, decelerate and fall on the ground and go up the tube without stopping.

Objectives:
• Mother Tumor has been located. Destroy it!
• Time to shoot and drive!

Level 4: Rumble in the Jungle

Rumble in the Jungle is the fourth track featured in the game. This track’s driving lane is very bad, there aren’t really time savers, just try to fall really well on every U-ramp and you might get that sweet A+.

Objectives:
• The Mother Tumor is out of action. Good job!
• No more electricity for the Commies!
• This may have unexpected consequences. Brace yourself!

Enter Miami is the fifth track featured in the game. It’s not a difficult track to A+, just keep going with the flow.

Objectives:
• Find the entrance of the Cali Cartel HQ in Miami.
• Deploy the Turbo Flip to stake out the HQ and get inside.
• Say NO to drugs!

Trials of the Blood Dragon Walkthrough continues on Page 2 with Level 6: Death Wish.

Tags: Trials of the Blood Dragon