Home » News » Wii U News » The Legend of Zelda: Breath of the Wild Videos & Info

The Legend of Zelda: Breath of the Wild Videos & Info

Nintendo fully unveiled The Legend of Zelda: Breath of the Wild at E3 2016 in Los Angeles, where the Wii U version of game was playable to attendees.

Check Out The Legend of Zelda: Breath of the Wild E3 2016 Trailer and amiibos Videos: 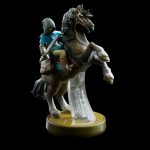 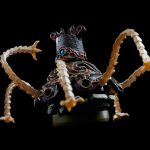 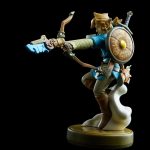 
You can found lots of gameplay footage at Nintendo’s YouTube channel. 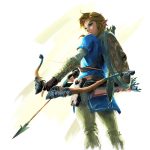 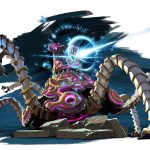 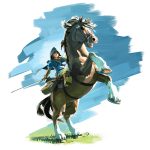 Today Nintendo gave fans just a taste of how The Legend of Zelda: Breath of the Wild takes the franchise to new heights. Nintendo’s booth at E3 immerses attendees in the world of the game. As E3 attendees investigate Hyrule, they can explore the game any way they want because the world is so vast and players are not required to take a pre-determined path. This sense of freedom and vastness will truly come alive in the final game when the experience isn’t limited by the restrictions of a show floor demo.

During a Nintendo Treehouse: Live demo, Nintendo showed that heroic Link needs to be resourceful as he explores his environment. It’s important for players to become familiar with their surroundings so they can find weapons or collect them from defeated enemies. Food helps Link sustain his hearts and can give him a temporary boost or ability that will sustain him.

The game breaks with some conventions from the series. For example, many of the minor enemies are no longer scattered randomly around the world, as many now live together in colonies. Link can climb towers and massive structures to get a bearing on his surroundings. He can even reach the top of mountains – any mountain he can see, he can climb. He can paraglide to lower areas or even use his shield to slide down a mountain. Link will travel across fields, through forests and to mountain peaks. 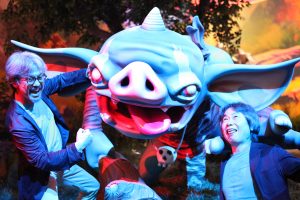 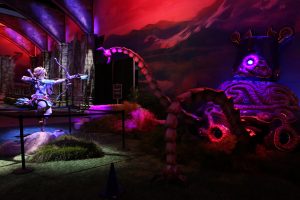 
The game’s wild world surrounds Link, and he must pay attention to changes in climate, as a shift in weather or temperature can affect the environment and his ability to survive in it. A sudden downpour might douse a roaring campfire or a lightning storm might be attracted to Link’s metallic weapons. Players might need to bundle up with warmer clothes or change into something better suited to the desert heat.

More than 100 Shrines of Trials dot the landscape, waiting for players to discover and explore them in any order they want. As players work their way through the traps and puzzles inside, they’ll earn special items and other rewards that will help them on their adventure. Puzzles in the game often have multiple answers, and secrets can be found everywhere. Exploration and discovery are a huge part of the fun.

The Legend of Zelda: Breath of the Wild is scheduled to launch simultaneously for both the Wii U console and Nintendo’s next system, code-named NX, in 2017. The game also includes compatibility with amiibo, which are sold separately. Nintendo announced a new series of amiibo figures specific to the game that includes Link with a bow (“Archer”), Link on horseback (“Rider”), and a “Guardian” that is the first amiibo with flexible parts. The existing Wolf Link amiibo works with the game as well: When players tap a Wolf Link amiibo to the Wii U GamePad controller, Wolf Link will attack enemies on his own and help players to hunt. He has three hearts, unless players carry over save data from The Legend of Zelda: Twilight Princess HD. Wolf Link disappears when his hearts run out. Details can be found here.

• Shrines of Trials: More than 100 of these locations are scattered around the world for players to find, and in some cases finding the Shrines can be a puzzle in itself. As a result, Shrines offer more compact challenges that can be solved in a variety of ways. In order to earn a Spirit Orb from the monks who designed these challenges, players must overcome challenges or solve puzzles.

• Runes: While exploring Shrines, players can earn Runes. For instance, the Magnesis Rune can help Link lift and toss metal objects. The Remote Bomb has two different types of bombs: rolling spherical ones and cubical ones that stay in place. The Stasis Rune briefly stops moving objects, while the Cryonis Rune freezes water and causes an ice pillar to appear.

• Weapons and Combat: The game contains a wide variety of weapons, many new to the series. Players must find weapons or take them from enemies, but weapons wear out as you use them. Players can also time offensive and defensive maneuvers to temporarily slow time and connect with a flurry of strikes against their opponent.

• Food: In another break with conventional gameplay for the series, players hoping to replenish their hearts or score some easy rupees will come up empty when they cut grass. Link can forage for a variety of foods in his environment, including apples and mushrooms. He can also hunt for food. Consuming uncooked foods gives him a modest health increase, but cooking different kinds of ingredients together will result in dishes with different effects, such as cold or heat resistance, for a limited amount of time.

• Climate: From snowy areas to desert heat, Link must dress appropriately for the weather. If he needs to stay warm, he can don appropriate clothing, warm himself with a fiery torch or even eat food to maintain his body temperature and his health. Link also needs to be careful during lightning storms – if he is equipped with metal equipment during a downpour, he can find himself attracting deadly lightning bolts.

• amiibo Compatibility: A new series of detailed amiibo figures specific to the game were announced this morning, and Treehouse staff finally revealed how the Wolf Link amiibo from The Legend of Zelda: Twilight Princess HD will connect to the game. When players tap a Wolf Link amiibo to the Wii U GamePad controller, Wolf Link will join Link to attack enemies on his own. He initially has three hearts, but players can raise his heart count by completing the Cave of Shadows and carrying over the save data from The Legend of Zelda: Twilight Princess HD. Wolf Link can be summoned once a day, and disappears when his hearts run out. However, you can use Wolf Link again the next day.

Tags: Nintendo NX, The Legend of Zelda: Breath of the Wild