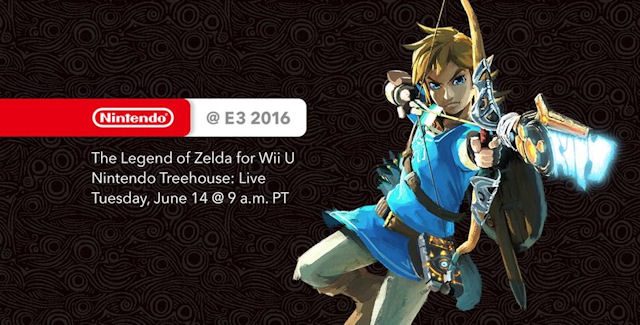 The E3 2016 Nintendo Press Conference is just a Treehouse Live this year. The broadcast aired today, and has revealed brand new information about Nintendo’s Wii U, NX & 3DS game lineup. Nintendo’s E3 2016 keynote conference started on June 14th at 9:00AM PDT / 12:00PM EDT / 5:00PM GMT and lasts for 6 hours all day and again the day after. What follows is a bulletpoints roundup…

Only 2 gameplay demos at the show this year are: The Legend of Zelda: Breath of the Wild as well as Pokemon Sun and Moon. But it’s been hinted there may be 1 or 2 secret games revealed!

• After a short introduction by Reginald “Reggie” Fils-Aimé — the president of Nintendo of America — The Legend of Zelda: Breath of the Wild debut gameplay trailer opens the show! Coming to Nintendo Wii U & NX in March 2017.

• Pokemon Sun and Moon trailer starts with the starters Rowlet, Litten & Popplio as well as Legendaries Solgaleo & Lunala exploring with the trainer in the Alola Region. Coming to 3DS on November 18, 2016.

• The first hour was dedicated to Pokemon Sun and Moon gameplay, narrated by the creators from Game Freak.

• The second hour (and the rest of the day) was dedicated to spoiler-free The Legend of Zelda: Breath of the Wild gameplay to explore the huge open world the Wii U & NX game offers.

Link wakes up shirt & shoe-less in a hibernation chamber where a woman tells him to wake up. He picks up a Sheika Slate that looks like a Wii U tablet with a glowing center. This Zelda focusses on technology. The woman’s voice (Princess Zelda?) speaks again saying “Link… You are the light (our light) that must shine upon Hyrule once again. Let’s go…” as Link steps from the cave into the open world’s Great Platea. The Old Man (from the first Zelda game?) introduces you to this area.

Note: Nintendo is focused on making games for the Nintendo NX console/handheld launch in March 2017. That’s why this E3 show Nintendo aren’t doing a Digital Event or Press Conference. Instead Nintendo made the following statement what they are doing this year.

To quote: “To ensure attendees are able to truly experience the freedom of exploration the game offers, The Legend of Zelda for Wii U [and NX] will be Nintendo’s focus of the show this year, and will be the only playable game in Nintendo’s booth via extended demos.”

Credit: Nintendo Livestream. 263,000 livestream viewers at its peak on Twitch.

Tags: Pokemon Moon, Pokemon Sun, The Legend of Zelda: Breath of the Wild