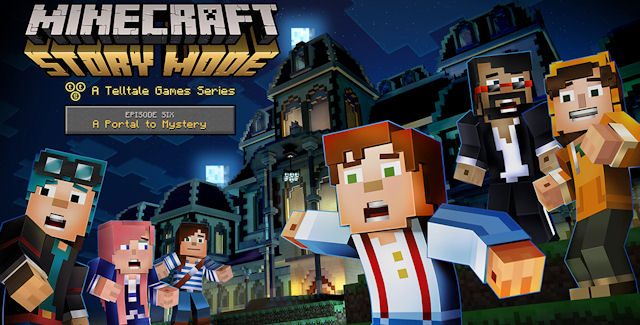 The Minecraft: Story Mode Episode 6 walkthrough for “Episode 6: A Portal to Mystery” will guide you through the beginning to ending moments of gameplay with strategy tips for this graphic adventure game on the PC, Mac, Xbox 360, Xbox One, PS3, PS4, PS Vita, Wii U & Mobile (iOS and Android-based devices).

Up next is the Episode 6 new Youtuber voice cast trailer:

Pricing: A Portal to Mystery’ is the beginning of an add-on series of three post-season adventures, which can be purchased digitally as part of the new Adventure Pass for $14.99 and includes access to Episodes 6, 7 and 8 as they release. The episode will also be available individually for $4.99 USD. Players will need to own at least Episode 1 in the series or the season pass disc in order to purchase Episodes 6, 7 and 8.

Chapter 1: Invitation to Die For

Synopsis: In Episode 6: ‘A Portal to Mystery’, continuing their journey through the portal hallway, Jesse and crew land themselves in another strange new world – one completely overrun by zombies. With a timely invitation to take refuge in a spooky mansion, they find themselves thrown into a thrilling mystery alongside famous members of the Minecraft community.

They meet a cadre of famous adventurers from the Minecraft community who have also sought refuge from the dangers outside. Things take a turn for the worse, as an enigmatic masked figure soon appears, with sinister intentions. It’s a race against the clock to stop their ruthless tormentor and get to the bottom of a treacherous mystery before it’s too late.

Several special guest stars from the Minecraft community join the cast in this new episode, all playing characters from their own YouTube videos. Players will get to interact with Joseph Garrett as Stampy Cat, Stacy Hinojosa as Stacy Plays, Dan Middleton as DanTDM (The Diamond Minecart), LDShadowLady, and Jordan Maron as CaptainSparklez!

Note: Your path in ‘A Portal to Mystery’ will differ greatly depending on your choices made in prior episodes, so more than one playthrough is definitely recommended! You will have completely different experiences depending on where you’ve decided to go!

Chapter 4: The Science of Deduction

Chapter 5: From the Ashes & Chapter 6: Elementary, My Dear Jesse (Ending)

Who is the White Pumpkin? Get ready for the final part of this mystery adventure.

Overview for all Alternative Choices in Minecraft: Story Mode Episode 6 “A Portal to Mystery”:

Next Episode: Please join our “Minecraft: Story Mode Episode 7 Release Date” discussion about what will happen in Episode 7.

Thanks to Telltale Games, Gamerzombie & AFGuides for the walkthrough videos.