Atlus has announced a “Burn to Fight” Premium Edition for The King of Fighters XIV in North America. 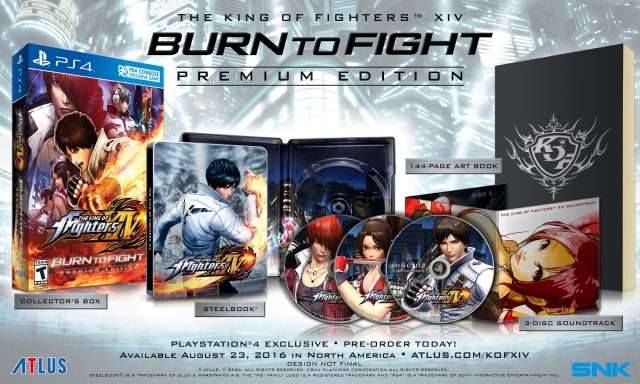 • SteelBook – The game disc will be encased in a collectible SteelBook emblazoned with the series’ fiery mainstay, Kyo Kusanagi, literally burning to fight.

• Art book – This 144-page art book will be filled with original character/stage drawings from throughout the series.

• 3-Disc Soundtrack – Those looking for an audio fix will be able to enjoy a three-disc soundtrack (housed in a gorgeous Mai Shiranui illustrated case) comprised of 60+ electric songs worthy of the greatest fighting tournament in the world.

• Collector’s Box – All the above items will be packaged in a scorching box adorned with familiar characters.

The standard edition of the game will cost $59.99 / CA$79.99. Pre-orders and a limited number of launch editions will arrive in a special SteelBook case, and the Classic Kyo costume add-on will be free for all players to download for the first week following launch.

The King of Fighters XIV is due out for PlayStation 4 in North America on August 23, in Japan on August 25, and in Europe on August 26.

Tags: The King of Fighters XIV