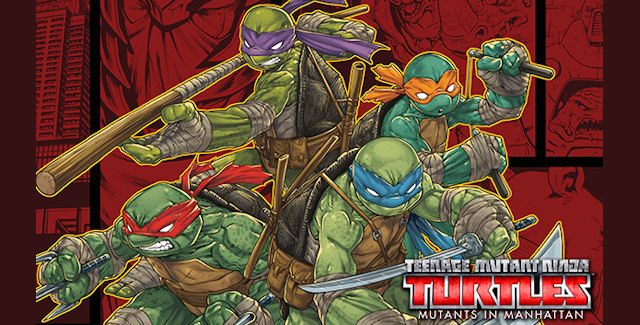 The Teenage Mutant Ninja Turtles: Mutants in Manhattan walkthrough will guide you through the beginning to ending moments of gameplay with strategy tips for this hack ‘n slash action game on the PS3, PS4, Xbox 360, Xbox One & PC.

Let’s start the TMNT: Mutants in Manhattan walkthrough with an introduction video!

Please note that viewers must be at least 12 to watch, so no harm comes to those with innocent eyes. This game includes Fantasy Violence.

Battle alongside your brothers through the sewers, subways, and streets of NYC to take down Shredder and Krang’s evil organization, Foot by Foot. Unleash custom combat skills and powerful team combos to save Manhattan from the overwhelming dark forces growing in the shadows.

Zombie will be your guide showing you around the game’s areas.

The Turtles are back to take on Shredder and the Foot Clan. So join Leonardo, Michelangelo, Donatello and Raphael to take back Manhattan. Starting by taking down Bebop.

Secret Bosses Tip: When fighting a boss like Bebop if you do enough damage to him a “secret” second boss joins the fight. Which is a boss from another stage. For example: Bebop gets Rocksteady, Rocksteady gets Bebop, etc.

Return the gold bars, find out about the enemy’s plans at North Station. Then defeat the stage boss Rocksteady.

Tip: Ninjutsu are unlocked as your player level increases, and Charms can be obtained from green rocks hidden around each stage.

Go to the bottom floor, destroy the Krang UFOs, and beat the boss Slash.

In this Skyscraper stage the Turtles must disarm the bombs. Transport the Krang Bombs to the Portal. Then fight Karai in a boss battle.

Follow the submerged sewers. Go to the bottom floor to defeat all enemies. And complete the Armaggon boss fight.