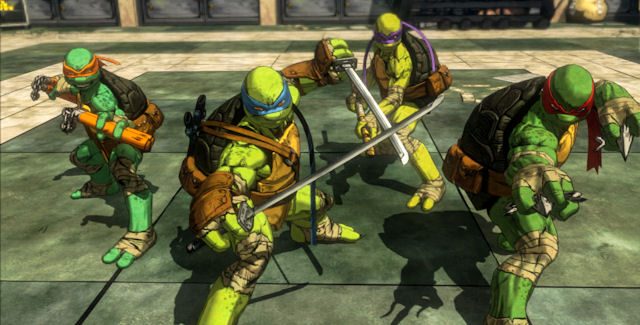 The Teenage Mutant Ninja Turtles: Mutants in Manhattan trophies guide lists every trophy for this PS3 & PS4 hack ‘n slash action game and tells you how to get and unlock them all.

In the Teenage Mutant Ninja Turtles: Mutants in Manhattan trophy guide we’ll show there are 51 Trophies (3 Hidden Trophies) that can be earned in the PS3 and PS4 versions. Earn Bronze (41), Silver (7), Gold (2), and Platinum (1) Trophies to increase your Gamer Level.

1. Hero in a Half-Shell (Platinum) — Unlock all Trophies

3. Nice to meet you! (Bronze) — Play online at least once

5. Wear it with Pride (Bronze) — Equip at least one Emblem to your profile

Note: Collectibles seem to be entirely random. For example: The final stage of the game is the shortest stage and has all five collectibles in one single room.

18. No Respect for Machinery (Bronze) — Destroy 30 cameras and laser devices

22. Red means Stop (Bronze) — Destroy a rampaging car with a drum can

24. When Turtles Fly (Bronze) — Traverse 1 mile in the Residential Area without touching the ground

25. Look out Below! (Bronze) — Destroy a helicopter

26. Let There be Light (Bronze) — Activate the ceiling switch during the battle with Slash

Tip: During the Slash boss battle there’s a blue switch on the ceiling you can hit with your throw weapon. Throw it by pressing on the L1 and R1 shoulder buttons to throw your swords at the ceiling light.

27. On Top of Things (Bronze) — Climb to the highest point in Karai’s stage and do a little dance

Location: You have to go to the largest skyscraper and do a dance. Scale the building the turtles first start the Karai level atop. Then climb the antenna to a very small platform. Now sit still, no input, for a little while and your turtle will dance triggering the trophy to pop up.

28. Soooooaaaaap (Bronze) — Have all Turtles turn into zombies simultaneously by touching contaminated water

Location: This can be done on the Armaggon stage AKA the Shark boss level. There’s purple ooze on the ground you need to walk into it with all turtles following behind until they touch it and zombify.

30. Explorer (Bronze) — Find the secret room in the TCRI building

Secret Room Location: On the Krang boss rush level, you’ll want to use the T-Glass Scanner in one of the later levels (it’s a room towards the beginning of the level where there’s enemies dancing around). There April will see something’s showing up on her map and you’ll see an orange panel on the wall (a hidden circle entrance) that you can check with your X-ray sense and enter for the trophy to unlock.

Up next, a walkthrough of the Krang boss rush level on Very Hard difficulty.

32. Goin’ Up! (Silver) — Survive the elevator section at the TCRI building without taking any damage

35. Double K.O. (Bronze) — Enter the Pizza Room during the snapshots when a boss is defeated

36. Pizza Poser (Bronze) — Eat a pizza during the snapshots when a boss is defeated

37. Sorry not Sorry (Gold) — Have everyone perform a Communication Action during the snapshots when a boss is defeated

39. Turtle Power! (Bronze) — Use Turtle Switching to defeat 1 enemy with all 4 Turtles

Tip: To do “Turtle Switching” hold the L2 left shoulder button and hit up down left or right to switch between turtles. Then hit the same enemy once with every turtle, and defeat him for the trophy to pop up.

40. Traitor in their midst (Bronze) — Defeat 5 enemies at once by blowing up a Foot Soldier carrying a bomb bag

41. Out of this World (Bronze) — Experience all of the Krang UFOs’ status effects

43. Group Hug (Bronze) — Use a Combo Attack to defeat 6 enemies at once

45. Bodyguard (Silver) — Complete a gold bar mission without the carrier being hit even once

46. Stealth Master (Silver) — Complete a stage without being spotted once (outside of Missions)

47. Eavesdropper (Bronze) — Hang out outside of an enemy hideout for at least 10 seconds

Location: On the Armaggon stage AKA the Shark boss level, the enemy hideout is found when the game tells you to defeat the enemies in their hideout. Simply stand by the sewer entrance for at least 10 seconds before entering the enemy hideout.

50. Showoff (Silver) — Have Mikey do his co-op move finishing pose during the snapshots when a boss is defeated

Tip: This secret trophy may take a full playthrough or longer to get. As long as you try doing the finishing pose with Michelangelo at the end of every boss fight throughout the story campaign.

51. Next time, take a cab (Silver) — Defeat Rocksteady and Bebop by letting them get run over by a train

Please comment if you have any Teenage Mutant Ninja Turtles: Mutants in Manhattan trophy unlock tips of your own. Kudos will be given. – Thanks for visiting!