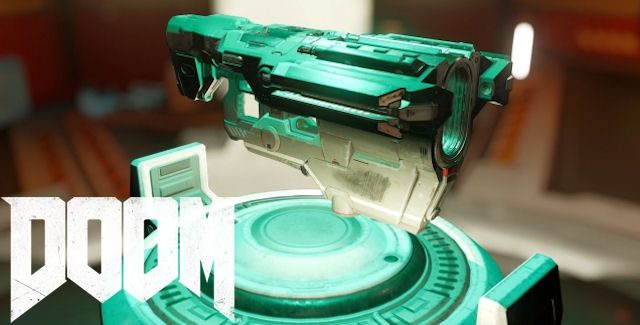 The Timeline for all these in-game Weapons locations is listed below.

Tip: Hold the Triangle button on PS4 or the Y button on Xbox One/PC to activate the Weapon Selection Wheel and choose from all of your available weapons.

How to find missing Weapons?:

• Explore hidden rooms & Classic DOOM map areas: These will have a hidden lever / switch nearby that you must pull to open up the weapon door to the room. Some rooms will have a collectible or item you must pick up to get the weapon.

• Collectibles: There are two UAC Marineguy collectibles in every mission of the story Campaign Mode. – The trick to finding these collectable action figures quickly is to max out the Area-Scanning Technology category of the Praetor Suit! The “Full View” upgrade you get from doing that allows you to immediately see where all Collectibles are on the map. With that you can load up the mission you’re missing the Collectible in at any time via chapter select, and see its exact location right from the start, so you don’t go on a wild goose chase through the level.

This Area-Scanning Technology shows all Collectible locations, but it doesn’t specifically show the Weapon locations the UAC Marineguy dolls are found in. – Most weapons are located alongside many of those UAC Marineguy dolls with similar weapon-esque names, some weapons don’t have any of those items there but a gun instead, so it can be a bit annoying to find some of the weapons when there’s no indication as to where they are (which is why our videos will show each weapon location).

Collectible Progression Tip: Does the game save your weapons progress? Yes, all weapons you find are immediately saved after picking them up, so you do not need to reach the next checkpoint (not even if you die afterwards).

Note: You have successfully obtained a weapon when you pick it up and the on-screen text reads “Codex Entry Acquired” for the weapon in question.

Sidenote: Weapon Mods are covered in the Field Drones guide.

Where to find all Weapons in DOOM 2016? The in-game collectibles & room locations for the Weapons are described in GamerForEternity’s detailed video guides.

The Weapons are listed in the step-by-step videos, in the order that they appear chronologically per mission.

Timeline in minutes for the Mission 1 Weapons:

• [1:13] — Weapon Location #1: UAC Pistol — The first Pistol you get in the game (your default weapon that you get automatically) actually has its alternate name written on the end of its barrel: LFG MK. 2 meaning the Little Fucking Gun mark 2! 😆

• [4:05] — Weapon Location #2: Combat Shotgun — The second weapon you get in the game, the Combat Shotgun, you have to get from the fallen soldier in order to progress past a door near the end of the Prologue.

Up next are the weapons you can find in the second mission of DOOM 2016, titled “Mission 2: Know Your Enemy” at the Resource Operations.

Timeline in minutes for the Mission 2 Weapons:

Here are weapons you can find in the third mission of DOOM 2016, titled “Mission 3: Meltdown” at the Foundry.

Timeline in minutes for the Mission 3 Weapons:

Check out the next new weapon you can find in the fourth mission of DOOM 2016, titled “Mission 4: Beginning of the End” at the Argent Facility.

Timeline in minutes for the Mission 4 Weapons:

Up next is another new weapon you can find in the fifth mission of DOOM 2016, titled “Mission 5: Argent Tower” in the Argent Energy Tower.

Timeline in minutes for the Mission 5 Weapons:

Up next is the weapon you can find in the sixth mission of DOOM 2016, titled “Mission 6: Into the Fire” at the Kadingir Sanctum.

Timeline in minutes for the Mission 6 Weapons:

Coming up is the weapon you can find in the seventh mission of DOOM 2016, titled “Mission 7: Hell on Mars” at the Argent Facility (Destroyed) area.

Timeline in minutes for the Mission 7 Weapons:

DOOM 2016 Weapons Locations Guide continues on Page 2 with Missions 8 to 13.