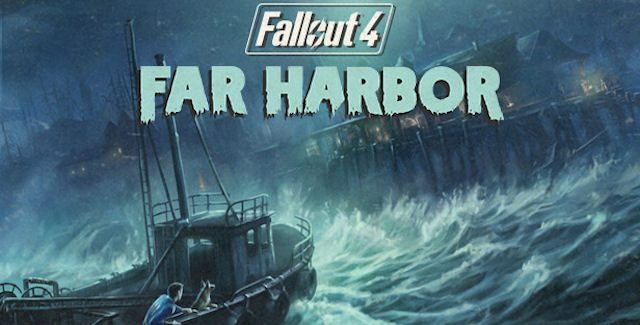 Please note that viewers must be at least 18 to watch, so no harm comes to those with innocent eyes. This game includes Bad Language and Violence.

How To Start The Far Harbor DLC

Here’s how to start The Fallout 4: Far Harbor DLC:

– Step #1: When you download the “Fallout 4: Far Harbor” DLC, know that after it’s downloaded and you start the game, it sometimes takes a little while for the DLC to show up in the game.

– Step #2: This new DLC becomes accessible after you’ve completed the “Getting a Clue” main quest line early on in the Fallout 4 main game. It’s for characters of any level (no level requirements).

– Step #3: Once a character has completed that main quest line, go to the northeastern corner of the map. There is a new area available called “Nakano Residence”. Here you will meet parents looking for their missing daughter. Talk to them and get the daughter’s last holotape from the safe in the boathouse. There’s a key to the safe in the picture frame near the safe. Talk to the parents again and they will offer you their boat. Accept, climb aboard and you will reach the Far Harbor DLC area.

How to access Far Harbor via fast travel with voice-over tips:

Reaching the island of Far Harbor will also unlock the “Far From Home” trophy / achievement.

A new case from Valentine’s Detective Agency leads you on a search for a young woman and a secret colony of synths. Travel off the coast of Maine to the mysterious island of Far Harbor, where higher levels of radiation have created a more feral world. Navigate through the growing conflict between the synths, the Children of Atom, and the local townspeople. Will you work towards bringing peace to Far Harbor, and at what cost? Far Harbor features the largest landmass for an add-on that we’ve ever created, filled with new faction quests, settlements, lethal creatures and dungeons. Become more powerful with new, higher-level armor and weapons. The choices are all yours.

New Companion Location: Your new companion, Longfellow, can be found in a local bar! This grizzled old salty-type is sort of like Quint from Jaws.

More exploration of the largest landmass that Bethesda have ever created for an add-on. Roaming the island and talking to the locals, leading up to finding Uncle Ken. Meanwhile we also encounter a Super Mutant Master boss fight.

Part 3: Where You Belong

Time to find out the truth behind Kasumi’s disappearance from her parents! We also further explore the Synth compound Acadia on the island and meet DiMA to uncover its secrets.

Let’s retrieve DiMA’s earliest memories from the Children of Atom by posing as a new recruit. All hail the radioactive fog god!

Part 5: The Way Life Should Be & How To Access DiMA’s Terminal

Retrieve DiMA’s memories #1 to #5 from the terminal in The Nucleus and then by the end of the quest you’ll find the Marine Combat Armor Shipments to gain the T-51 Power Armor.

Will you use the Nuclear Launch Key to destroy The Nucleus in order to bring peace between humans and synths on Far Harbor? How about encouraging Kasumi to reunite with her parents?

New Perk Tip: Upon completion of the Reformation quest, you will receive the “Protector of Acadia” Perk. What it does? When severely damaged, there’s a chance you’ll receive a massive (but temporary) bonus to damage and energy resistance!

How to find the entrance to Vault 118? On the island go to Cliff’s Edge Hotel, west of Far Harbor. Take the stairs to the first floor of the hotel next to the Vault door in the ground outside (take out all the Ghouls inside the hotel). On the first floor, make your way to the balcony to find another stairs to the second floor. Make your way to the other side via a set of stairs and take the stairway down to the ground floor, exit the staircase through the door, walk through the hallway to find another set of stairs going down. Take out the automated turret and activate the Jukebox to open the elevator that goes all the way down to the hotel’s basement. Walk through the door at the end of the hallway to find the Vault 118 entrance!

Here’s the full “Brain Dead” quest walkthrough where we go inside Vault 118!