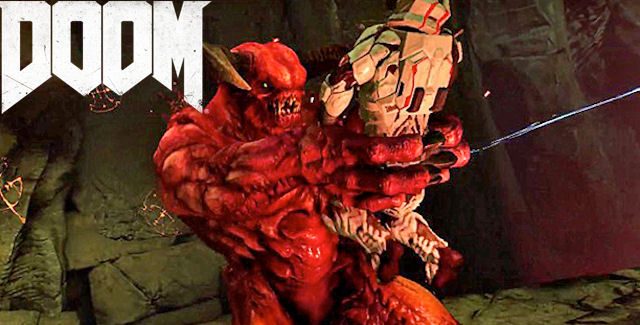 The DOOM 2016 trophies guide lists every trophy for this PS4 first-person shooter game and tells you how to get and unlock them all.

2. E1M1 (Bronze) — Complete the first mission of the campaign.

4. A Toe into Madness (Bronze) — Complete The UAC on Ultra-Nightmare.

This video guide will show you how to finish “Mission 1: The UAC” on Ultra-Nightmare, the best route to take, and when to bait enemies. You will need to do a lot of baiting, as groups of enemies are very difficult to fight considering you die in 1 to 2 hits on this highest difficulty.

5. Up Close and Personal (Silver) — Kill 50 enemies using the Chainsaw.

6. Specialist (Bronze) — Earn the Mastery for a weapon mod.

7. IDKFA (Gold) — Earn the Masteries for all weapon mods.

10. Timing is Everything (Bronze) — Use explosive barrels to kill 100 enemies.

11. Every Nook and Cranny (Silver) — Find all Collectibles.

18. Thorough Shopper (Silver) — Complete all Challenges for a single mission.

20. Rip and Tear (Silver) — Glory Kill all common enemy types in the campaign.

24. What Else Ya Got? (Gold) — Complete all Mission Challenges.

28. No Rest for the Living (Bronze) — Play 5 published SnapMaps.

30. Shoot it Until it Dies (Silver) — Defeat the Cyberdemon.

Strategy Tips: The Cyberdemon is the first boss you fight in DOOM (2016). The fight has two phases, the first phase he has few attacks and will mainly use his gun and missile barrage. He will occasionally charge but it is easy to avoid.

The second phase however, it gets a little harder. He will seal you in a stone corridor and do an attack that you have to jump / crouch to avoid it. His other attacks will be similar to the first phase. The key to this fight is to keep moving at all times, don’t stop. The super shotgun is very good for this fight.

Strategy Tips: The Hell Guards are the second boss in DOOM (2016). The first phase, you are fighting one of them. He’ll mainly use melee attacks, but he’ll have a few different attacks where he uses fire. Keep moving, and attacking after he does an attack. His shield makes it so you can’t damage him until after he has just attacked.

In the second phase, you’ll fight two of them. Use the same tactics as the first one. This time however, neither of them have shields. Just be careful as they like to spin around and use lots of melee attacks. It’s important to be on the move constantly.

Strategy Tips: The Spider Mastermind is the final boss in the game. She is a fairly tough boss fight, even on normal. Her laser beam attacks are very difficult to avoid (however, it is similar to the Cyberdemon where you jump and crouch). Her brain is the weak point. Using shotguns does a lot of damage, but she will swing her arms at you when you do this and that causes a lot of damage.

When she throws bombs, stop shooting. Just focus on avoiding them. When she poisons the floor, its important to get up on the pillars. While she is doing this, you can hit her with plenty of hits off while she is poisoning the place. She will fire a beam at you after this, be very careful to avoid this as it does a ton of damage.

Location: The BFG can be found in “Mission 8: A Brighter Tomorrow” after you meet Dr. Samuel Hayden in his office.

As you explore the weapons facility, you’ll find Dr. Peter’s corpse to use for accessing the ARC facility section called “BFG Lab Prime” where it is in development. Unfortunately the facility’s A.I. isn’t so easily fooled and detects you’re not him, causing laser defenses to appear. Taking out the laser beams’ power sources (with rockets) on the underside of their moving platform will make the lasers crash into the tablet below to reveal the BFG-9000!

Special thanks to Bethesda Softworks & Harry94 for the list, tips & guide videos.

Please comment if you have any DOOM 2016 trophy unlock tips of your own. Kudos will be given. – Thanks for visiting!