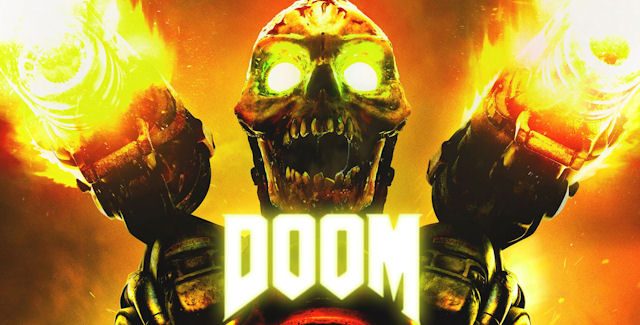 Here we will show you how to unlock all DOOM 2016 codes with a cheats list that’s valid for the PC, PS4 & Xbox One versions (where available).

How To Unlock 13 Classic DOOM Levels: Each of the 13 missions in DOOM 2016 has a secret — a hidden lever you must pull to open a nearby secret door you can enter — that unlocks a classic DOOM map. If you find & unlock one, it can be played in full by visiting the CLASSIC MAPS missions menu selectable from the main menu.

Of course, by entering the newly opened secret door you get to see classic DOOM graphics (although with new enemies in the place of the old ones) and you get to play part of the map (sometimes only one room) from the original DOOM; Whereas the unlocked classic map actually has the full map playable from the CLASSIC MAPS menu.

In “Mission 2: Know Your Enemy” near/under the Field Drones in the middle of the map, there’s a room. Opposite the room’s door is a walkway-type structure, and there’s a lever just underneath it to open it.

To find Classic DOOM Maps #3-13 [tips coming soon] don’t always follow the obvious path through a mission, as being observant can lead to finding secrets.

How To Unlock The Demon Destruction Mini-Game: Play the story Campaign Mode up to “Mission 9: Lazarus” where you visit Lazarus Labs. During the mission you can find a mini-game in the room that has the crypt the player character is found in (we’ll call him DOOM Marine Guy). On the left hand side of this stone crypt, you need to interact with the computer for the “Time Well Spent” challenge of this mission to start, classic DOOM music included. It plays like Candycrush, but with demons!

How To Unlock The Demon Destruction Mini-Game: There’s another mini-game to be found in the campaign. Super Turbo Turkey Puncher 3 returns! Play the story Campaign Mode up to “Mission 9: Lazarus” where you’re on your way from the Weapons Division (advanced research complex) to visit the Lazarus Labs facility elevator. During the mission right after you come from outside and go inside via the Lazarus Labs facility elevator. As you exit that elevator you can find the mini-game right in front of you, it’s in the MIXON hallway that has grey storage blocks stacked up in the corner, jump over them to find an arcade cabinet with the game hiding behind them (in the very corner of the hallway).

How To Unlock Ultra-Nightmare Difficulty: While Nightmare difficulty level for the story Campaign Mode is available from the start, you’ll have to play through the game on any difficulty up to the end of “Mission 6: Into the Fire” to unlock the “Ultra-Nightmare” difficulty.

Ultra-Nightmare features perma-death, if you die you go back to the beginning of the game and a death marker will be left behind as a reminder of how far you progressed. On top of that pickups are worth less and you die in 1 to 2 hits, since enemies deal even more damage than on Nightmare difficulty. You’re allowed to save your campaign upon comleting a mission, and dying or failing in a Rune Trial will not affect your progress.

How To Unlock New Game Plus Mode: After you finish the story Campaign Mode once, there’s a “New Game +“-like option that will unlock in the Campaign Mode if you select “Continue” from the first mission (or any mission for that matter). Doing this lets you keep all your upgrades on subsequent playthroughs!

In Bethesda Softworks’ previous FPS game, Wolfenstein: The New Order, the following Console Commands menu would unlock. This dev console / cheats menu returns in the PC version of this new DOOM game from the same publisher with another id Tech engine.

To activate all DOOM 2016 cheats, during gameplay you should press on the ~ (that symbol is a tilde) key to bring up the command console. After that you can lookup below what cheats there are & what their codes to enter are.

Important Disclaimer: The game does mark you for cheating the moment you touch the tilde key, even if it’s by accident. Doing this has two negative effects on your savefile…
A) On a ‘tainted’ game save you can no longer collect UAC Marineguy Collectibles / Dolls.
B) If you have a ‘tainted’ game save, on a clean game save you can collect UAC Marineguy Collectibles / Dolls again. However, you can not collect Classic DOOM Levels on any save game anymore. In order to get Classic DOOM Levels you must have no ‘tainted’ game saves at all on your DOOM 2016 install.

There are no other DOOM 2016 cheats on Xbox One, PS4 & PC yet. So until more are discovered, we made the handy DOOM 2016 guides listed above to help you with tips and tricks for the game!

Do you know of any DOOM 2016 cheats or unlockables?
Let us know in the comments, you’ll get credit for finding out. – Thanks for visiting!