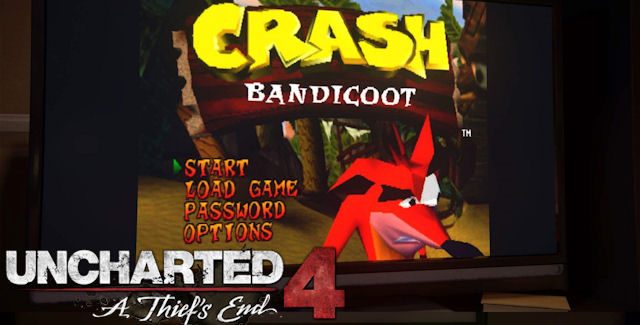 Let’s take a look at some funny Uncharted 4 easter eggs! They can be found if you know where to look! 🙂

Easter eggs have been confirmed for Uncharted 4. Watch footage of them all below.

Nathan Drake plays Crash Bandicoot in Uncharted 4 from the PlayStation 1 console in his livingroom. In Chapter 4: A Normal Life he’ll have Elena challenge him to beat the high score to start the level. And you can play it again as a mini-game in the last chapter, the Epilogue, where you can try to beat the highscore of 3500 points.

How to finish Crash Bandicoot level without dying:

You have a chance to finish one of the levels from the first Crash Bandicoot game. This next video shows how to get to the end and how to avoid all of the obstacles without dying. But even if you lose all lives the chapter will still continue.

Additionally, one of the three Strange Relics (Treasures) you can collect in the game’s “Chapter 21: Brother’s Keeper” is named a Strange Fruit that’s actually an apple-like Wumpa Fruit from the Crash Bandicoot series.

There’s an interesting poster in the Epilogue of Uncharted 4 showing The Last of Us: American Daughters comic book poster on the wall. Clearly it’s another multi-part series from Darkhorse Comics (like one that came out before The Last of Us game) but how does this play into the Last of Us universe and does it reveal anything regarding The Last of Us 2 sequel? It looks more like a prequel about Ellie’s mom.

There’s another reference in Uncharted 4 to developer Naughty Dog’s other big PlayStation-exclusive series, The Last of Us. One of the Treasures you can find in “Chapter 9: Those Who Prove Worthy” on a corpse in the rope-swinging caves is of Firefly Druckley’s Strange Pendant. “Druckley” is a combination of Neil Druckmann and Bruce Straley, the directors of Uncharted 4 and Last of Us.

The last of the three Strange Relics (Treasures) you can collect in the game’s “Chapter 12: At Sea” is named a Strange Relic big bowl that’s actually a Precursor Orb from the Jak & Daxter series.

Keep your eye out for another playable arcade game. Details to follow if it exists.

Have you found any Uncharted 4 easter eggs?