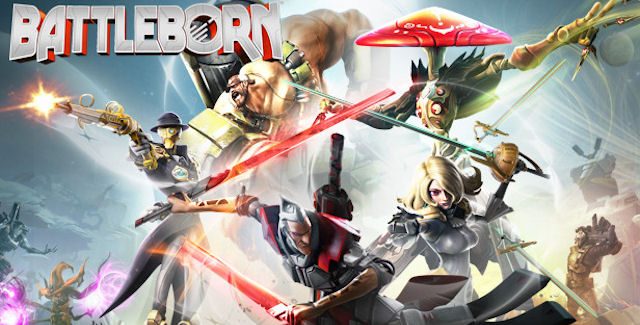 The Battleborn walkthrough will guide you through the beginning to ending moments of gameplay with strategy tips for this FPS-MOBA game on the PC, PS4 & Xbox One.

Please note that viewers must be at least 13 & 16 to watch, in America & Europe respectively, so no harm comes to those with innocent eyes. This game includes Strong Language and Violence.

From the creators of Borderlands comes Battleborn, a new first-person shooter for every kind of badass.

A tremendous band of badass heroes fight to protect the universe’s very last star from a mysterious evil in this next-gen shooter by the creators of Borderlands. To defend it, you’ll need to utilize every type of character and weapon you’ve ever imagined — from cyborg hawkmen to samurai vampires to mini-gun wielding man-mountains. Slash and parry, run and gun, cast and dash, or simply obliterate foes all while building and growing your personal team of heroes. Choose your hero and fight alone or co-operatively alongside friends in story missions, or battle against them in fast-paced competitive multiplayer matches.

How do you sort through all of the chaos at the end of the universe? Don’t worry, we’ve got just the thing! If you don’t know what Battleborn is – or just need some help sorting the nihilistic robots from the star-consuming extradimensional horrors – watch this official Gearbox video to get ALL of the details.

The 25 playable heroes – from the five remaining factions in the universe – are all that stand between us and total annihilation. This uneasy alliance is at the verge of falling apart. That’s the good news. The bad news: You’ve got star-sucking cosmic horrors, called Varelsi, and the treacherous Jennerit scumbag, Rendain, — both are on a mission to drag every last star system kicking and screaming into the void.

And what better way to tell the stories of what brought these Battleborn together than with an awesome animated comic run?

A few years and several hundred star veilings are enough to drive even the most loyal officers to betrayal.

As Penarch is nearly veiled, Rendain relishes in his success and looks ahead to the inevitable destruction of Solus, The Last Star. While unbeknownst to him his closest advisor has other plans.

The Varelsi invasion is becoming overwhelming but the United Peacekeeping Republics (UPR) will not leave their own man, clone, or avian behind.

Meanwhile on the ground on Penarch Prime, Benedict has been pinned down by the Varelsi horde. His friends Oscar Mike and Montana attempt to join his position.

When the end of the star system is immanent, a UPR commander must choose between obeying orders, or saving untrustworthy potential allies.

Penarch is nearly darkened, and anyone left on the surface has little time to escape. Ghalt and his U.P.R. soldiers are ordered to evacuate immediately, but he doesn’t intend to leave anyone behind.

Welcome to the Battleborn walkthrough!

Gamerzombie will be your voice-over commentator showing you around the game’s maps.

As the universe is about to blink out of existence, it’s up to you and this motley crew of Battleborn to save it. Some interdimensional jackholes and a traitorous scumbag have been taking stars. WHOLE STARS. And have left us to fend for the scraps. It’s time to take up arms and defend Solus, the very last star in the universe. You were born for this!

Command 25 unique heroes and save the universe from the brink of extinction!

Control Tips:
• Press B (PC) / Down on the D-pad (PS4/Xbox One) to go back/recall. – Don’t stand at a regeneration station if you’re at 30% health it is almost NEVER worth it, you will waste so much time and die so much more if you refuse to back when you need to.
• Press V (PC) / Circle (PS4) / B (Xbox One) to do a melee attack. – Every Hero has a melee button and it’s extremely important in certain situations, for instance if rath is ulting you and you want to knock him back or some heroes even have a movement tech with it