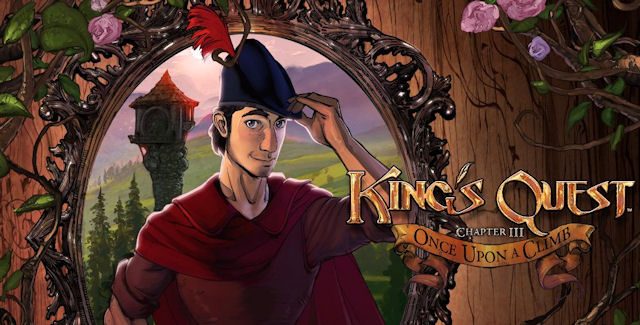 The King’s Quest 2015: Chapter 3 walkthrough will guide you through the beginning to ending moments of gameplay with puzzle solutions and strategy tips for this episodic adventure game on the PC, PS3, PS4, Xbox 360 & Xbox One.

Let’s start the “King’s Quest 2015 – Chapter 3: Once Upon a Climb” walkthrough with an intro video followed by a full perfect playthrough!

To learn more about what’s new in Chapter 3, including the romantic comedy elements, watch this brand new interview with one of the creators, Creative Director Matt Korba.

Story Synopsis: King’s Quest – Chapter 3: Once Upon a Climb is a romantic comedy adventure featuring a beloved character from the series’ classic beginnings: King Graham’s wife and Gwendolyn’s grandmother, Queen Valanice. Dedicated fans may think they know the legend of how Graham rescued his future bride from the wicked witch Hagatha’s tower but the truth behind the fairy-tale is much more complicated!

In his latest adventure, King Graham recounts his most personal tale yet. When the magic mirror reveals the location of his one-true love, Graham must climb to daring new heights to save his future Queen. But what he encounters there might just send his notions of romance sailing out the window.

All Puzzles Solved: Covered are…
– How to save the Owl Family’s cute Baby Owl? This is done by walking back to the starting area (back in time as it were) twice and planting the Spiniferous Thornweed Seed as well as planting a Tiny Acorn you dug up earlier using a Shovel.
– The next puzzle in this first part of Chapter 3 is puzzle that tasks you to create a Dinner Guest out of all extra food. Use a Coat Rack, add a Purple Cape, and find out the Hat location.

All Puzzles Solved: Covered are…
– Help clean up the mess in the Tower. Find another way to get the Vase.
– Play a game of Moral Quarrel and win with Princess Neese.
– Get past the Invisible Wall.
– Hide from Princess Hagatha and where to place the Long Spear.

All Puzzles Solved: Covered are…
– Explore the Tower.
– How to solve the Open Door Clock Puzzle.
– Where to find a Tool to fix the Cracked Lute.
– How to fix the Broken Puzzle Box.
– Get advice to go over to Town Square.
– Use the Old Wrench, good for one fixing.
– Hagatha Pretty Princess Ball Puzzle Completed.

All Puzzles Solved: Covered are…
– Princess Graham and Princess Vee.
– Magical Hourglass Puzzle, and Pit of Quicksand.
– Bring Back the Keys of Harmony.

Part 5: Get The Log Across & Golden Acorn Guitar Song Puzzle

All Puzzles Solved: Covered are…
– How to get the Log across, Golden Acorn Guitar Song Puzzle Solved.
– Princess Graham and Princess Neese Adventure Option.
– Don’t shoot the Wolf!

All Puzzles Solved: Covered are…
– Bring a Gift for Hagatha and give her Words of Encouragement.
– Princess Vee Alternate Choices.

To Be Continued: Chapter 4 will arrive later on, in the last half of 2016. – Get a preview of it and join the discussion on our “King’s Quest 2015: Chapter 4 Release Date” page.

Thanks to Sierra, GamereactorTV & GamerrZombie for the info & walkthrough videos.