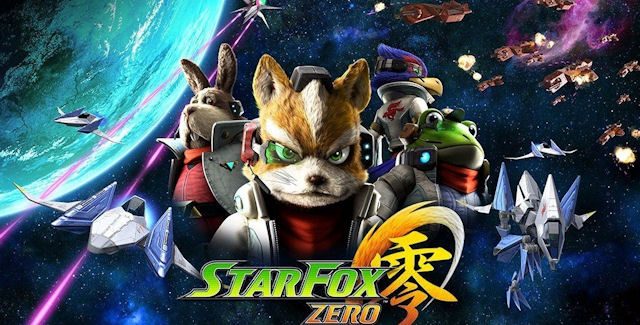 Our Star Fox Zero walkthrough will guide you through the beginning to ending moments of gameplay with strategy tips for this scrolling shooter game on Wii U.

Please note that viewers must be at least 7-10 to watch, in Europe & America respectively, so no harm comes to those with innocent eyes. This game includes Fantasy Violence.

The Star Fox team arrives on Wii U for a new adventure. Fox, Falco, Peppy and Slippy save the Lylat system in this new deep space dogfighting adventure. Using the Wii U GamePad controller and the TV together creates a unique interface that allows players to experience the game with two different viewpoints within the Arwing – aim and shoot enemies in one direction while flying in another. This frees up the TV for a more cinematic flight experience. Then, pilot the Arwing with its new Walker transformation, along with the new Gyrowing and the Landmaster Tank, to traverse interplanetary terrain.

A high-octane interplanetary dogfight!
An evil empire has risen and the Lylat system is in danger. As legendary space pilot Fox McCloud, blast through an onslaught of enemy forces to bring peace to the galaxy. In this white-knuckle space shooter, it’ll take more than luck to master the Arwing jet, the Gyrowing flight drone, and the Landmaster tank! You have what it takes. Now prove it.

General Pepper needs your help! Use your TV’s cinematic view to fly and identify targets and see through the eyes of Fox with the Wii U GamePad’s screen as you lock onto enemies and fire. You’ll also have to use advanced flight techniques like boosting and barrel rolls to survive the relentless assault. With the help of the rest of Team Star Fox , tackle missions in the air and on the ground in a variety of planets teeming with enemies. Then engage vast armadas of powerful ships in outer space dogfights. Master your craft, defy the odds, and earn your face-to-face meeting with Andross. Only you can restore peace to the galaxy!

An Epic Battle to Save the Universe. An evil force is marching across the universe and the only thing standing in its way is the Star Fox team. Can this group of ragtag star pilots stop Andross and his plans for galactic domination?

It Was Only 5 Years Ago. James McCloud, Pigma Dengar, and Peppy Hare of the Star Fox team were sent on a mission to the planet Venom, where a twisted scientist, Andross, had been exiled years earlier. Upon their arrival, Pigma betrayed the team. Peppy barely escaped but James was never heard from again.

Now Andross Has Returned. The evil, power-hungry Andross is back, marching his fearsome forces across the galaxy. General Pepper now turns to a new Star Fox team, lead by James McCloud’s son, Fox McCloud, to save the Lylat System and defeat Andross once and for all.

A legendary team of adventurers-for-hire that has often defended the Lylat System in times of peril. Founded by James McCloud, the leadership passed to his son, Fox, after his apparent death.

• Falco Lombardi: A hotshot flyboy who’s got your back when the going gets tough. He can seem a bit arrogant at times, but his keen eye often helps the Star Fox team stay on track.

• Peppy Hare: James McCloud’s old wingman. A seasoned pro and the glue that holds the team together, Peppy gives battle advice and tactical tips to the rest of the Star Fox team and is a noted expert in Barrel Roll maneuvers.

• Slippy Toad: A close friend and a gifted mechanic, Slippy is an essential but inexperienced member of the team. He has a knack for getting himself in trouble but provides vital shield gauge intel in battle.

• The Mastermind Andross: Exiled to the desolate planet Venom, the twisted scientist Andross is now using the planet as his base of operations to launch an attack on the entire Lylat system.

A fearsome foursome of mercenary pilots who have been recruited by Andross to stop the Star Fox team by any means necessary.

• Wolf O’Donnell: The leader of Star Wolf and archrival of Fox McCloud.

• Andrew Oikonny: Nephew of Andross and presumed successor to his evil empire.

A New Way To Fly. Use your TV’s cinematic view to fly and identify targets, then see through the eyes of Fox on the Wii U GamePad controller’s screen as you lock onto enemies and fire.

You’ll also have to use advanced flight techniques like boosting and barrel rolls to survive the relentless assault.

BeardBear will be your guide showing you around the game’s areas while including all the Wii U GamePad’s voices.