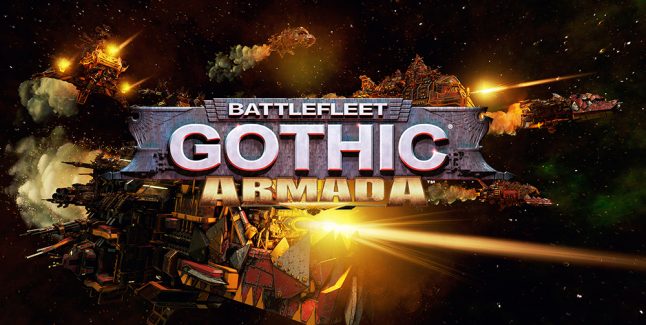 Battlefleet Gothic: Armada, the space real time strategy game set in the Warhammer 40,000 universe disembarks tomorrow on PC. Focus Home Interactive today have unveiled its Launch Trailer that is as spectacular in content as it is in realisation. Plunge into a vertiginous sequence-shot, straight to the heart of massive and intense battle between the warships of the Imperial Navy, and the Chaos fleet that have come to Port Maw to wipe out the Imperium’s void base from the star map.

During this incredible two-minute-long sequence-shot, you will find yourself witnessing brutal broadsides from macro-cannons of Imperial battleships, who are cornered by the Chaos armada that pound them with raking fire and boarding actions. Follow the manoeuvres of attack craft as they dance between gigantic Chaos ships being shaken by the violent ramming of Imperial cruisers…

As the Planet Killer of Warmaster Abaddon completes its devastating assault, the moment of victory lies within the grasp of Chaos. The Imperial Navy though will not yield at the last, and summons reinforcements and support from their allies – the angels of death, the Space Marines, whose a few ships are unveiled for the first time in this video.

Space Marines, as well as an additional faction that will be unveiled later, will be offered to all the Early Adopters of the game. The Early Adopters offer stands for all the players who pre-ordered the game, or will buy it until two months after release.