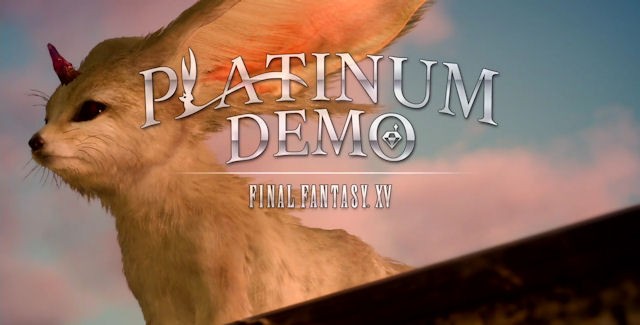 Final Fantasy XV’s Platinum Demo is a free download demo that offers a glimpse into the final game as it whisks players away to a fragmented dreamscape of Noctis as a child. This storyline is unique to the demo and will not be available in the final version of the main game. Players can take control of young Noctis as he masters various weapons, magic skills and driving. To overcome the many monsters within this fantastical dream world, young Noctis will have Carbuncle as is his magical guide.

Players who complete the Platinum demo will unlock the exclusive Carbuncle summon DLC for the full game at launch. The demo is available on Xbox One via the Xbox Games Store, and through the PlayStation Store for the PlayStation 4 computer entertainment system.

This Final Fantasy XV Platinum demo whisks players away to a fragmented dreamscape, introducing an original story with a number of unique twists. Join young Noctis and his magical guide, Carbuncle as you explore the fantastical world of his dreams. You will be able to explore driving, magic, and the latest combat system in this exclusive gameplay experience, which won’t be available in the main game.

The main Final Fantasy XV game begins as a truce is declared between Lucis and Niflheim, ending the cold war which has raged over possession of the world’s last crystal. On the day when an official treaty is to be signed, Niflheim invades Lucis and takes the nation’s crystal for its own before launching attacks on Solheim, Tenebrae and Accordo. Having escaped during the attack on Lucis, Noctis and his friends now travel to retrieve their city’s crystal while trying to defeat Niflheim’s forces.

Because of the war, Noctis and Stella, who share some form of connection, are forced to fight each other. Noctis Lucis Caelum is the only playable character. His crew is comprised of fellow support members: Gladiolus Amicitia, Ignis (Iggy) Stupeo Scientia, and Prompto Argentum.

Are you excited by this second Final Fantasy XV Demo?