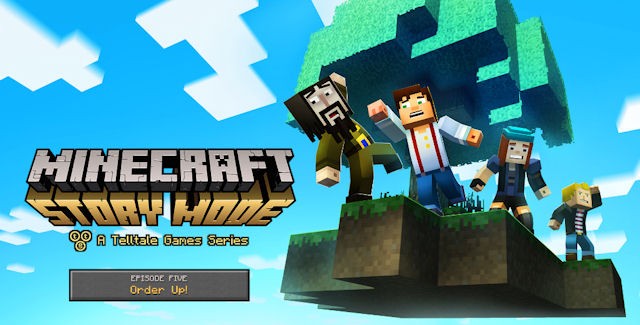 The Minecraft: Story Mode Episode 5 walkthrough for “Episode 5: Order Up!” will guide you through the beginning to ending moments of gameplay with strategy tips for this graphic adventure game on the PC, Mac, Xbox 360, Xbox One, PS3, PS4, PS Vita, Wii U & Mobile (iOS and Android-based devices).

The full Minecraft: Story Mode Episode 5 walkthrough is livestreamed by me right now!

Synopsis: In Episode Five, the adventures of Jesse and the NEW Order of the Stone are set to continue. On a tip from Ivor, Jesse and friends head to an abandoned temple holding mysterious treasures. Ambushed by former Ocelot Aiden and his crew, our heroes find themselves in an entirely new world: Sky City! As they explore, the Order finds that resources are at a premium, and nothing but ‘The Void’ exists below the known world. When Aiden convinces Sky City’s ruler that the New Order of the Stone are up to no good, you’ll need to make some tough choices to clear your name, and keep Aiden from destroying an innocent world.

The cast of Minecraft: Story Mode also continues to expand as Jesse, played by Patton Oswalt (Ratatouille) or Catherine Taber (Star Wars Rebels), join Ivor, played by Paul Reubens (Pee-wee’s Big Holiday) and the gang on a trip to the skies. They’ll meet a growing cast that includes Sean Astin (The Goonies, The Lord of the Rings) as Reginald, the loyal Captain of the Guard, Jim Meskimen (Parks and Recreation) as the rebellious Milo, and Melissa Hutchison (The Walking Dead: A Telltale Games Series) as the Founder of Sky City.

Are you ready to tangle with Aiden again? Excited to explore an entirely new Minecraft world with Jesse and the crew?

Your path in ‘Order Up!’ will differ greatly depending on your choices made in prior episodes, so more than one playthrough is definitely recommended! You will have completely different experiences depending on where you’ve decided to go!

Alternative playthrough for the full Episode 5 to get all choices, secrets and endings:

Overview for all Alternative Choices in Minecraft: Story Mode Episode 5 “Order Up!”:

• Did you demolish Ivor’s lava house?
• Did you run from the guards or try to help Ivor?
• Did you try to save the Founder or help Lukas?
• How did you end your confrontation with Aiden? Push him off the ledge or help him to safety by capturing him?
• Who did you leave in charge of reconstruction? Isa, Milo or have both be in power?

Next Episode: Please join our “Minecraft: Story Mode Episode 6 Release Date” discussion about what will happen in Episode 6.

Thanks to Telltale Games, Doug, Alzu Gaming & AFGuides for the walkthrough videos.