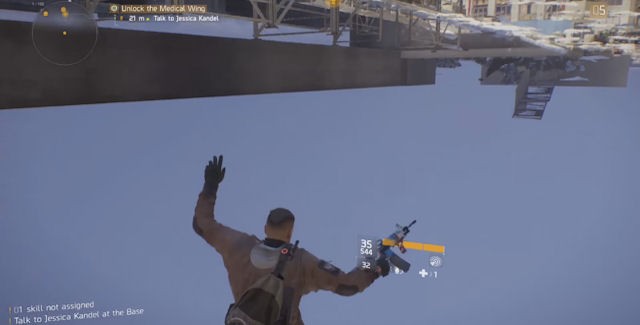 Here are some of the newly discovered The Division glitches and solutions.

Note that these The Division glitches can of course get patched by Ubisoft at any time. But you might encounter the here-under listed glitches for yourself in the meantime.

Index of The Division Guides:

Under the Map Glitch

This glitch has you fall under the map.

Glitch Cause: During the “Talk to Jessica Kandel at the Base” objective, right before entering the Base (to unlock the Medical Wing) you risk falling straight through a patch of icy / snowy ground outside. Pay attention to avoid weird-looking textures.

Glitch Solution: You’ll fall until you end up standing under the city map. Then the game will notify you will be respawned in a few seconds due to you appearing “Outside playable area”. Sadly any icy / snowy ground in front of the Base entrance will cause you to fall under the map again and again, so you are forced to restart the game to play again.

The verify identity is not working at the beginning of the game at your Base of Operations during the “Make contact with Division Agent Faye Lau” Objective.

Glitch Cause: The verify identity activation will not complete or too many people are in the way of the door to Division Agent Faye Lau and are not letting you go through to contact her (which is the objective).

Glitch Solution #1: Log out and log back in. To log out go to the Pause/Inventory screen where it says log out with the Triangle button on PS4 / Y button on Xbox One. That’s where you log out of The Division back to the Character Select screen. Then log back in to see if it’s less crowded and lets you into the door to Faye Lau.
Glitch Solution #2: If you’re on PC and the first solution doesn’t work, then to solve the problem pay attention to this: when you log off and it gives you a mike error message, try uninstalling the Beta and it should work.
Glitch Solution #3: The issue should disappear after the game’s launch week crowd subsides. Basically, right now the servers cannot handle in huge login load all at the same time.

How To Fix Glitches: Download the latest patch for The Division, Ubisoft uses patches to try and fix the most common glitches on all systems (PC, PS4 & Xbox One).

APPEARANCE MENU HAS BEEN UPDATED:

• New “Mission Overview” has been added to the Mega Map
• Contaminated zones will now display the required filter level on the Mega Map
• Field data with audio will automatically play when you pick them up
• If you start listening to field data with audio from the menu, you can keep listening outside the menu
• Subtitles added for all Field Data that play audio
• Mission entrance menu usability has been improved
• Significantly increased the number of crafting materials obtained from loot crates
• The icon for landmarks in the Dark Zone has been changed and now indicates if non-player enemies are present or not

• New “Help” menu is now available in the Settings menu. It stores all the loading screen and context sensitive tips
• New tutorials added for certain gameplay features and mechanics (these can be switched off in the Options menu)
• Added information to the in-game loot pickup UI that displays why an item can’t be picked up
• The deployable turret no longer targets non-rogue players and doesn’t damage neutral players caught in the line of fire
• Skill modifiers have been added directly to gear (previously only available on gear mods)

• Fixed glitches that could be exploited by players to gain an unfair advantage in the game (such as invisibility, shooting through walls, etc).
• Extended server-side checks to detect any illegal actions from the game client, limit their impact in the game and track down the perpetrators.
• Fixed an issue on character select screen that resulted in getting stuck with a specific combination of inputs
• Fixed a progression blocking issue caused by accepting a group invite at a specific moment during the Base of Operations unlock sequence
• Players will no longer return all the way back to start screen after creating or logging in to their Ubisoft Club account
• Fixed remaining bugs that prevented log-in attempts when non-essential services were offline
• Overall stability increased
• Further backend improvements and optimizations
• Localization adjustments and bug fixes
• Additional minor bug fixes and polish

Here’s the list of changes that will be implemented during the server maintenance on March 22nd, 2016

Named enemies. will now drop better loot in Challenge mode than in Hard mode.
Added a cooldown period for the Static Turret stun attack in order to avoid a stunlock in PvP and PvE game modes.
Named NPCs will no longer respawn after being killed in the Open World. This will prevent situations where players were able to kill a same named NPC over and over again.
Modifications to the weapon talent: Trained.
It can now only be rolled on Shotgun, Marksman rifles and Pistols
Its bonus has been reduced from 1%-5% to a constant 0.1%
For the Midas SMGs, Trained Talent has been replaced with Responsive Talent which increases damage when getting closer to the target. This applies to existing weapons as well as newly acquired ones
For all SMGs, LMGs, and Assault Rifles, it will be replaced with another randomly picked weapon talent. This applies to existing weapons as well as newly acquired ones
Fixed a speed run exploit for the Rooftop Comm Relay mission
Fixed an issue where weapons dealt no damage if the reload animation was interrupted by an agent’s skill
Fixed an issue where players became stuck in an emote animation if activated via chat while auto running
Fixed a bug where skill power would be increased permanently while using the Death by Proxy talent
Fixed a bug where experience was not being awarded for completing all side-missions in the Midtown East safe house
Fixed instances where the Seeker Mine with Airburst / Multi-mine mod would detonate too soon, miss targets or cause no damage
Fixed a bug where grenades would sometimes not display the blast radius warning before detonating
Fixed an issue where some NPCs in low cover would not react to being shot by the player
Fixed issues where emotes would cause the player model to behave oddly (missing guns, player stuck in emote animation, etc)
Fixed a bug where weapon mods and weapon skins would not show up on other players in the game world
Fixed an issue where DPS would not be calculated properly when purchasing a new weapon mod

Players can now heal other neutral players in the Dark zone, by using First Aid and Support Station skills
Players are now able to fast travel to Dark Zone checkpoints, but only when coming from outside the Dark Zone
The Dark Zone disconnect timer has been increased to 30 seconds, meaning players will remain in the game world longer when logging out while in the Dark Zone (this applies while not in combat)
Items extracted from the Dark Zone are now properly marked as “new” items when moved to the players inventory
Players killed in the Dark Zone now drop ammo, medkits and grenades. This loot is generated and not taken from the dying players’ inventory
Players killed in the Dark Zone will lose less Dark Zone Funds and Experience (Rogue and non-Rogue)
Dark Zone Funds and Experience rewards for surviving Rogue status have been improved
Dark Zone Funds and Experience rewards for killing Rogue agents have been improved
Phoenix Credits drop have been increased on lvl 31 and 32 enemies in the Dark Zone:Please note that due to this fix causing client stability issues, we have to remove it from this update until it can be addressed in a next one
Lvl 30: 1-3 Phoenix Credits
Lvl 31: 2-4 Phoenix Credits
Lvl 32: 3-5 Phoenix Credits
Increased drop rate of High-End items from lvl 31 and 32 named NPCs in the Dark Zone.
Increased drop rate of High-End Division Tech Material from lvl 32 named NPCs in the Dark Zone.
Improved Dark Zone Chests items quality:
Rank 30 chests will now drop Superior (Purple) items instead of Specialized (Blue)
Keys chests now have a chance to drop High-End (Gold) items
Dark Zone Funds drop rates and quantity on NPCs has been reduced.
Fixed a bug where the Wildfire and Fear Tactics talents were affecting neutral players in the Dark Zone.
Fixed instances where players would receive a DELTA error message when entering the Dark Zone
Fixed a bug where sometimes players could not loot anything after returning to the game following a network disconnection
Fixed Stage 1 Rogue timers not displaying correctly when Rogue players receive damage from another player

Fixed a few lights that did not cast global illumination

Tobii Eye Tracking bug fixes and improvements
On launch, the PC client now monitors PC graphic settings and applies the best settings for the user’s configuration. This is unless the user has custom settings.
Fixed an issue where the Map was sometimes difficult to navigate with a mouse
Fixed issues with Hungarian, Korean, and Russian localizations
Fixed an issue that prevented matchmaking while on the Map
Removed the Store button from the Character Selection screen on PC versions of the game. Players can find the store page in the Ubisoft CLUB app directly
Fixed increment number on Day 1 Patch Notes (was 1.1, now correctly states 1.01)

Have you encountered any The Division glitches?