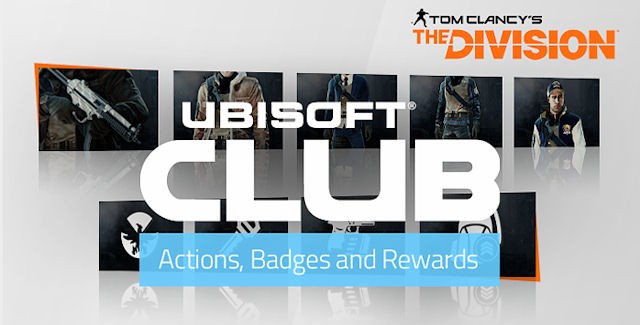 Here we will show you how to unlock all The Division codes with a cheats list that’s valid for the PC, PS4 & Xbox One versions.

Index of The Division Guides:

Complete actions in The Division while playing to earn XP (points). Spend these points to unlock exclusive rewards in your game, that are only available if you login using the Ubisoft Club (formerly Uplay) screen/app at the startup of the game. (Go to https://club.ubi.com to register if you’re not already signed up.) If you play a lot of Ubisoft games with Ubisoft Club turned on, you may already have lots of points to spend on the unlockables from the get-go!

Enhance your gaming experience with Ubisoft Club! Ubisoft Club rewards are basically shortcuts and cheats.
They include in-game skins, items, selected original game soundtracks, and more! Get free additional content as you play through the game and complete missions!

The Ubisoft Club Actions for The Division that earn you points with which to unlock cheats:

These Actions automatically get unlocked as you play through the game’s Campaign Mode only, on these platforms: PS4, Xbox One & PC.

• Worth the Wait – Successfully Extract a contaminated item from the Dark Zone. [Earn 20 Units, 50 XP]

The Ubisoft Club Rewards for The Division:

Rewards help you cheat the game by unlocking various in-game items (some early, some exclusive). Get ready to unlock extra Phoenix Credits to buy high-level gear and get more Dark Zone Keys, outfits, crafting resources, and other equipment.

How To Claim Your Rewards In-Game: While playing, go to your Base of Operations, then open the door straight ahead that will lead you to a Rewards Vendor. That’s where you can claim all your Ubisoft Club items.

• Ubisoft Club ‘Go Bag’ – Adds a collection of essential items to the Rewards Claim Vendor, perfect for the recently activated Agent. Gives you; 3x Medkits, 500 Credits and assorted basic crafting materials to get you started. [Free after signin]

• Phoenix Credit Pack – Adds a pack of 30 Phoenix Credits to the Rewards Claim Vendor, use these to purchase high level equipment. [40 Units]

• Shortbows Weapon Skin – You need to complete “First to the fray” Action to get this Reward.

• Shortbows Sports Cap – You need to complete the “Team BETA, Active” Action to get this Reward.

• Shortbows Sports Jacket – You need to complete the “Last Chancers” Action to get this Reward.

• The Division Mobile Wallpaper – Unlocks a Tom Clancy’s The Division Wallpaper for use on your mobile phone. This can be downloaded from club.ubi.com. [Free after signin]

• The Division Desktop Wallpaper – Unlocks a selection of Tom Clancy’s The Division Wallpaper for use on your desktop or Laptop. This can be downloaded from club.ubi.com. [Free after signin]

This video shows how to earn Ubisoft Club Rewards to gain points in all Ubisoft games:

The Ubisoft Club Badges for The Division:

Unlocked Badges can be used to enhance your Ubisoft Club profile, to show off your game accomplishments.

• Know No Fear – Finish all of the missions at Level 30 on the Hard difficulty.

• Fixer Upper – Completely upgrade any two wings of the Base of Operations.

• Marathon – Discover ALL of the Safe Houses in Manhattan.

• Completionist – Complete all Club Actions in Tom Clancy’s The Division.

• Show me the Money! – Obtain all Club Rewards in Tom Clancy’s The Division.

• Last Man Standing – Eliminate the leader of the Last Man Battalion and his men in the U.N. Building.

The Paramedic, Firefighter, Police & Hunter gear sets will give your in-game Division Agent a unique look and includes skills that will help you take back New York.

How To Play In A Group As A Drone

It is RUMORED that the cancelled Companion App may be revived post-launch. Here are its original circa-2013 intended features…

The Division’s Companion App is real-time simultaneous gameplay on the tablet to give the game a new second screen experience. You will be able to play as a drone and join a group, just as if you’re another player.

You have your own persistence within the drone and have progression and skills and talents, a lot like the main game. So it’s not just a fluffy armory or an application. It’s a real game client that you can use to interact with the game itself. – The Companion App is fully real-time and can be played anywhere there’s an internet connection.

The Drone in The Division enables the following abilities:

The Division Tips and Tricks

GameSpot interviewed Ubisoft’s Game Director Ryan Barnard about The Division. He gives gameplay tips and tricks as part of a stage demonstration from E3 2015.

There are no other The Division cheats on Xbox One, PS4 & PC yet. So until more are discovered, we made the handy The Division guides listed above to help you with tips and tricks for the game!

Do you know of any The Division cheats or unlockables?
Let us know in the comments, you’ll get credit for finding out. – Thanks for visiting!