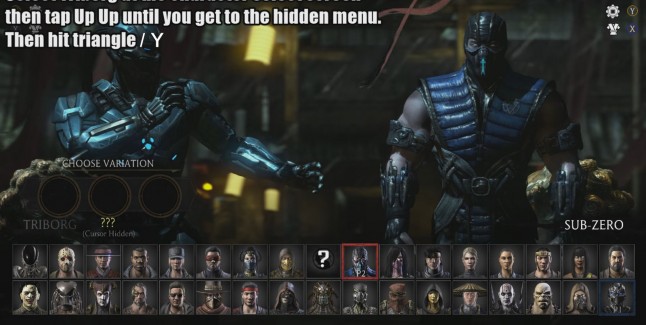 How to unlock all Mortal Kombat XL characters like Cyber Sub-Zero from the Kombat Pack 2? That question will be answered in this guide that shows you who to unlock, and how to get the full roster of 33 characters (37 if you count variations) in the PS4 & Xbox One fighting game. Which has been given a DLC characters pack / re-release with new characters: The Alien Xenomorph, Tri-Borg, Leatherface & Bo Rai Cho.

Below we’ve listed the Mortal Kombat X secret playable characters. Take the following steps to unlock each one, so that all unlockable characters in the game will be available to you.

How To Unlock All Mortal Kombat XL Characters

How To Unlock All Additional Secret Characters in Mortal Kombat XL / Kombat Pack 2?: There is one method to getting the rest of the characters. You can unlock more by completing or meeting certain requirements.

Next we show you a rundown of the unlock method for each character individually!

How To Unlock Cyber Sub-Zero

Cyber Sub-Zero Unlock Method: On the Character Select Screen select Triborg, then press Up, Up until you get to the hidden menu, then finally hit the Triangle button on PlayStation 4 or the Y button on Xbox One.

This video shows you how to get Cyber Sub-Zero (LK-520) secret 4th variation of Triborg in Mortal Kombat XL!

How To Unlock Shinnok

Shinnok Unlock Method: To unlock Shinnok you have to complete Story Mode to the end with any one character.

Just make sure you’re playing with your best character.

How To Unlock Paid DLC Characters

DLC Characters Unlock Method: All other unlockable characters in the game are paid DLC characters you can buy by spending real-world money in the PlayStation Store or Xbox Marketplace Store (or on Steam for the PC version’s Kombat Pack 1 only). After you finishing downloading the DLC pack(s) to your PC or console’s harddrive you can start the game to make these characters available for play…

I hope these tips helped you get everything hidden in the game.

Please check out our other “How To” guides listed at the top of this page to enjoy Mortal Kombat XL more! 😀

Credit: Thanks for the video to Deathmule & Warner Bros. for the tips.

Who are your favorite Mortal Kombat XL characters?