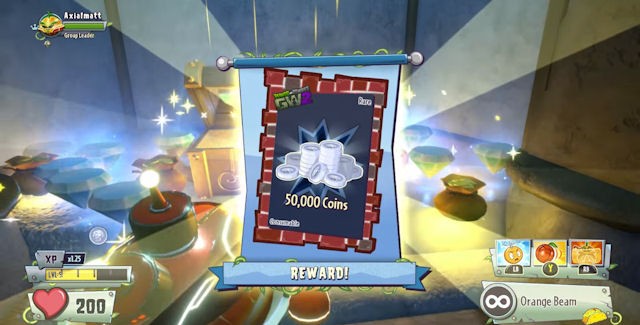 Here we will show you how to unlock all Plants VS Zombies: Garden Warfare 2 codes with a cheats list that’s valid for the PC, PS4 & Xbox One versions.

On the Backyard Battleground area, there are two secret rooms containing treasure chests that give you 50,000 coins and 20,000+ coins in a row. Time to make an easy 70,000+ coins!

This is best done with Citron and his orange-looking morphball rolling and boost jump abilities. The Cactus’ Drone is another option.

• Secret Room Location #1: Go down to the sewer as far down as you can roll and right next to where you can jump, you’ll see a big pool of green acid with green steam fumes coming from it. As the ball, go up the small stairs and boost jump over the acid onto the copper pipe. Change back into its walking form and follow the pipe without falling into the acid, then when the pipe leads into a wall you can see a sewer pipe. But because there’s still green acid between you and the sewer pipe, you’ll have to go back into ball mode and charge a boost shot to get past the acid (you can’t jump because thee ceiling is too low). Follow the sewer pipe and keep on the right-side until you reach the secret room. Once inside, open up all the treasure chests here (no Stars required to open) to get 50,000 coins and other rewards.

• Secret Room Location #2: In the Target Zone go to the shooting range, hop up to a higher area until you reach the wooden paneling. Note that the first time you get there you’ll see a big door (with a gnome on it) to the left, where you’ll have to pay 5 Stars to open up the shooting range. It has a secret room, and if you complete it in under 22 seconds you get a ton of extra diamonds?. Otherwise, simply open up the treasure chest to get your 20,000+ coins reward.

Note: The 7 Star treasure chests in the sewer also give coins.

All your characters can be promoted 5 times from the Backyard Battleground area’s Stat Room. Once a character reaches level 10 they can get promoted from the character’s Promotions menu. Promoting a character resets them to level 1 (you get to keep all upgrades), but earns them a new title, character plaque, and you’ll receive a 20,000 coins reward!

How To Unlock The Unicorn Chomper

Currently the only way to get Unicorn Chomper in-game is by reaching the maximum Rank 313 in the first Garden Warfare game, but you have until February 6th, 2017 to do so. Once you get it done (every 15 challenges you complete you gain 1 level to our total rank), then the Unicorn Chomper will be your loyalty reward for Garden Warfare 2. – In a year’s time it’s likely to become paid DLC.

How To Unlock The Z7 Imp & Mech

If you missed the pre-order bonus Z7 Imp & Mech download code (or don’t want get it in the Deluxe Edition of the game), don’t worry, there is another way to get it for Garden Warfare 2. The Z7 Imp & Mech can be unlocked in-game by buying a “Phenomenal Character Pack” with coins you’ve collected.

Do you know of any Plants VS Zombies: Garden Warfare 2 cheats or unlockables?
Let us know in the comments, you’ll get credit for finding out. – Thanks for visiting!