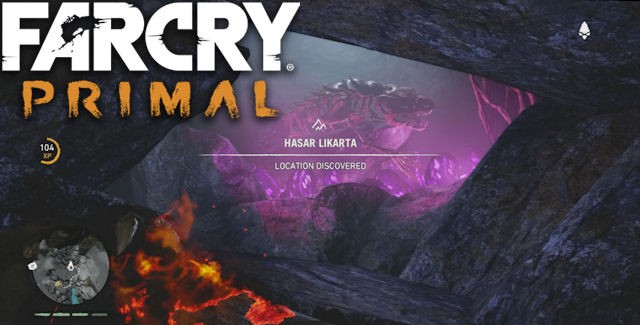 Let’s take a look at some funny Far Cry Primal easter eggs! They can be found if you know where to look! 🙂

Easter eggs have been confirmed for Far Cry Primal. Watch footage of them all below.

Location: Look at the in-game map. The cave is marked with a “?” symbol on the world map. – From your village spot, follow the river across the map to the top-right corner where the river ends/starts in the caves (east of the big frozen area). Enter the cave there in the north-east (called the Hasar Likarta location), and the Blood Dragon can be found at the end of this short cave.

Location: A couple of hours into the game after clearing all the tutorials, you will have opened up the game world. Start the “Urki The Thinker” Mission, which can be found in the south-east corner of the map. You can find his hut at the Mayta Wenja Camp location. In his “Fly Like Bird” mission where you have to explore the remote cave, Urki will ask you to collect a bunch of items for him including feathers. Upon finding all four on-screen indicated items, return them to Urki. At which point Urki will show off the assassin’s leap of faith ability in a cutscene where he jumps from a cliff into a bail of hay, like you do in the Assassin’s Creed games!

Location: Look at the in-game map. The campfire spot you can visit the love couple at is south of the Paysha River Outpost. – Visit the spot daily across a couple of day and nights and if you sneak crouch to them you will see Primeval babies being made.

You’ll laugh for a few seconds, then get really uncomfortable and leave them alone LOL!

Have you found any Far Cry Primal easter eggs?