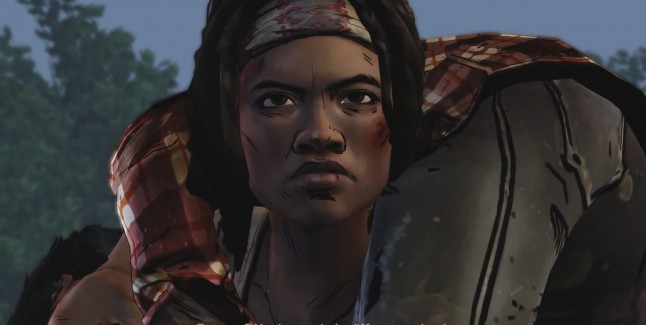 What is The Walking Dead Michonne Episode 2 release date? Telltale Games has promised that for this Miniseries you can expect a new downloadable episode every single month. As such, Episode 2 (titled “Give No Shelter”) will be released in March 2016, on March 29th. – All platform release dates have been confirmed and are listed below!

UPDATE: You can view the full episode in our The Walking Dead Michonne Episode 2 Walkthrough.

At the end of each Telltale’s The Walking Dead adventure game episode, Telltale Games is nice enough to include a teaser trailer for the next episode. In this case the on February 23rd, 2016 released The Walking Dead Michonne Walkthrough included the trailer for “The Walking Dead: Michonne – Episode 2: Give No Shelter” during the ending, as shown at the top of this page.

Episode 2 Synopsis Hints: These achievement / trophy names hint at the events that will happen in the next episode…

The Episode names hint at the overarching story themes:

Miniseries Info: The Walking Dead: Michonne – A Telltale Miniseries stars the iconic, blade-wielding character from Robert Kirkman’s best-selling comic books, portrayed in-game by award-winning actress Samira Wiley (Orange is the New Black). Haunted by her past, and coping with unimaginable loss and regret, the story explores Michonne across a three episodes of miniseries event. Players will dive into the mind of Michonne to discover what took her away from Rick, Carl, and the rest of her trusted group… and what brought her back.

A stand-alone three episode event, ‘The Walking Dead: Michonne’ further bridges together the Telltale game series with the canon of Robert Kirkman’s comic through one of its most complex characters.

The Walking Dead: Michonne – A Telltale Miniseries will premiere its first of three episodes, ‘In Too Deep,’ this February 23rd on PC/Mac from the Telltale Online Store, Steam, and other digital distribution services, the PlayStation Network for PlayStation 4 and PlayStation 3, the Xbox Games Store for Xbox One and Xbox 360, followed by a release on compatible iOS devices via the App Store, and Android-based devices via Google Play and the Amazon App Store starting February 25th. The second episode in the miniseries, ‘Give No Shelter,’ will follow in the month of March, and conclude with the third episode, ‘What We Deserve,’ in April. All three episodes in the miniseries will be available for purchase at the cost of $14.99 USD or equivalent when the first episode debuts, including access to the second and third episodes as they become available.

What do you think will happen on the next episodes of Telltale’s The Walking Dead: Michonne?