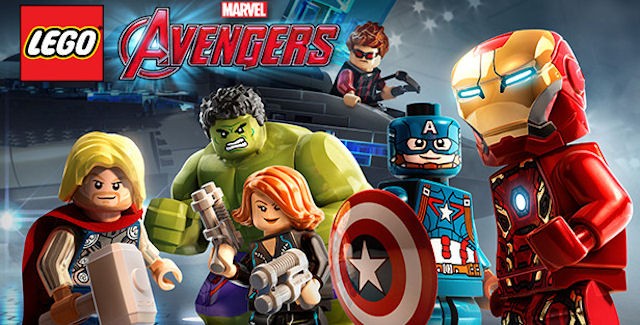 Our 100% Lego Marvel’s Avengers walkthrough will guide you through the beginning to ending moments of gameplay with strategy tips for this action-adventure game on the PS4, PS3, Xbox One, Xbox 360, Wii U, PC & Mac. The game’s also available on PS Vita & 3DS.

Lego Marvel’s Avengers is rated PEGI 7 in Europe & ESRB E10+ in America for everyone 7 to 10 years or older. This game includes Cartoon Violence and Pictures or sounds likely to be scary to young children.

Play as Earth’s Mightiest Heroes in their quest to save the world.

Answer: There are almost 200 playable characters in the game. That is, if you’re not counting the 42 downloadable content (DLC) characters announced so far. You can also save up to 12 custom characters using the game’s character creator.

A quick look at the character creator in the SHIELD Helicarrier’s Medical Bay (at the SHIELD logos).

Answer: Should be the same as how it was in Lego Marvel Super Heroes. This can only be done while you’re in Free Play mode (it doesn’t work in Story mode). The “switching characters” button is the same as the “transforming characters” button (that you use to turn into Lego Big Figures like the Hulk). You can only buy a character that you have already unlocked, by holding the Triangle button on PlayStation / holding the Y button on Xbox / X button on Nintendo, to bring up the character menu. When you see that character menu, then select the black silhouette of the character you want from the grid and select “Buy” to make it available for you to play with in Free Play mode.

Important Note #1: Unlocking characters usually involves completing campaign missions, side missions, or finding their token hidden throughout the Manhattan overworld map and other hub areas. To find out how to get all the characters in the game, please look at our upcoming “Lego Marvel’s Avengers Unlockable Characters Guide” for the full details.

Important Note #2: If you’re not done with the Story campaign yet, and are not doing Free Play mode, then the only way to bring up the character menu screen to buy characters is by finding a SHIELD computer. Look for the blue Vehicle Call-In Points that are connected to SHIELD and that can even take you to the SHIELD Helicarrier.

Answer: This can only be done while you’re in Free Play mode (it doesn’t work in Story mode). The “switching characters” button is the same as the “transforming characters (into Lego Big Figures)” button. Hold the Triangle button on PlayStation / holding the Y button on Xbox / X button on Nintendo, to bring up the character menu. – Keep in mind that on transforming characters you have to wait until they are halfway through their transform animation, and then hold the same button again for the character menu to pop up.

Answer: When you’re already playing the game in any level, press the pause button and in the menu that comes up you will find the “Go To Space” option. Select that option and you’ll be brought to a world globe map that shows all the Story levels you’ve already finished and that as a result are now playable in Free Play mode. You can even select what part of each level you want to start in for Free Play Mode.

Question: How to travel between Hub Worlds and Free Roam Levels?

Answer: Aboard the SHIELD Helicarrier flight deck, hop in the red & white colored AV-12112 that looks like the Avengers Quinjet, to fly to space. From there you can select where you want to go.

Answer: None discovered as of yet. – But be weary as the previous Marvel game had a platforming section where Hawkeye got stuck, leaving you unable to save.

Question: What are all Avengers Team Up Combo Moves?

Answer: The main heroes from Avengers 2: Age of Ultron have unique team up moves. These character include: Iron Man, Captain America, Thor, Hulk, Black Widow, Hawkeye, Scarlet Witch, Quicksilver and Vision. Below is a showcase of all of the unique Avengers team up moves in LEGO Marvel’s Avengers, along with time stamps for when each character move starts and ends.

100% means that using this walkthrough and our location guides (listed above), you will see how to get all characters & vehicles unlocked, and see where to find all Minikits, Red Bricks, Gold Bricks, as well as where to rescue all Citizen in Peril’s. You are a Superhero after all!

Your voice-over guide in this level will be Brian. Let’s have some family-friendly fun! 😀

Tony Stark / Iron Man Tip: This time around Iron Man can unlock all known suit variations from an in-suit selection wheel, so no need to keep switching to a new character if you need the Hulkbuster armor. Tony Stark on the other hand is a separate character, and aside from the suit options, he’s also very handy in that he can fix broken things in the game world with a welder.

With Lego Marvel’s Avengers now started, next we’ll be seeing Lego Nick Fury call upon our Lego heroes to save Earth from Lego Loki at the secret SHIELD Base.

In the second level we get to play as Nick Fury, Agent Williams and Maria Hill! They will face off against the turned eeeeeeeevil Hawkeye and Loki.

How To Unlock/Buy Characters/Vehicles Tip: Return to the SHIELD Helicarrier using any blue Vehicle Call-in Points to access the character shop, customizer, and many other features. — You can buy the characters and vehicles you’ve unlocked — by holding the Y button on Xbox / Triangle button on PlayStation / X button on Nintendo — to bring up the character grid and selecting them to buy them.

The boss for this third level is Red Skull and his Hydra cohorts. Sounds like a job for Captain America!

Fire Hint: Captain America’s shield can be used to put out Lego Fires. Press the B button on Xbox / Circle button on PlayStation / A button on Nintendo, to enter Shield Mode.

The fourth level at Stuttgart in Germany is where we get to play as Iron Man, Black Widow and Captain America to take on the next boss battle against Loki and Bad Thor.

Combo Tip: Make sure to charge your Combo Meter to do a dual-combo-attack between two Avengers to unleash on nearby enemies! They are not only powerful enough to wipe an entire screen clean of enemies, but they are often hilarious to watch.

In the fifth level we find ourselves battling aboard the Helicarrier.

Brick Interaction Tips:
– You need heat-based attacks, like Iron Man (Hulkbuster/Mark 44)’s laser beam, to destroy Gold LEGO objects.
– Iron Man can destroy Silver LEGO objects by firing his rockets (just pick any of the many Iron Man armors). So can anyone who has explosive weapons or abilities.
– Super strength characters can destroy or manipulate LEGO objects that normal characters cannot.
– The “big-figs” like the Hulk and Abomination can destroy or manipulate objects in ways even different than characters with normal super strength. As well as do a super jump and climb buildings.
– Mrs. Marvel (Kamala Khan) can shrink, grow as well as bend & stretch (in the previous game she could build objects from black Cosmic LEGO pieces).
– Scarlet Witch has the special abilities to use Mind Control and Telekinesis. Which will come in handy when you want to move things and people around.
– You will need a Dig ability character to complete a lot of the challenges inside the hub levels. You can find Ms. Marvel (Kamala Khan) in the Manhattan Hub edge of the park by doing her Crocodile Conundrum mission.