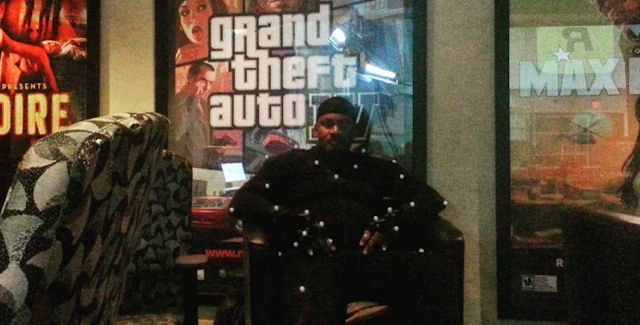 Today he posted a photo to his official Instagram account showing him wearing a motion capture suit, sitting down looking tired from work at Rockstar North studios in front of Grand Theft Auto and other posters, saying “LOL”. A clear hint that like Grand Theft Auto 4’s two story DLC episodes from February & October 2009 (titled “The Lost and Damned” and “The Ballad of Gay Tony”), Grand Theft Auto 5 will also be getting an expanded storyline through downloadable content expansions!

When browsing Mr. Fonteno’s Instagram history, one of the many GTA5 posts has him at home standing in front of framed GTA5 Franklin artwork, as-if to say he’s getting ready to dive into the role (without being able to say so). Possibly indicating he got the call from Rockstar five weeks ago, back in December 2015.

Usually recording all the voice actors is one of the last steps in getting a DLC expansion ready, so we might get the tentative first expansion starring Franklin (and crew?) in early 2016. Exciting to think about. 🙂

What would you like to see happen in the Grand Theft Auto 5 Story DLC?