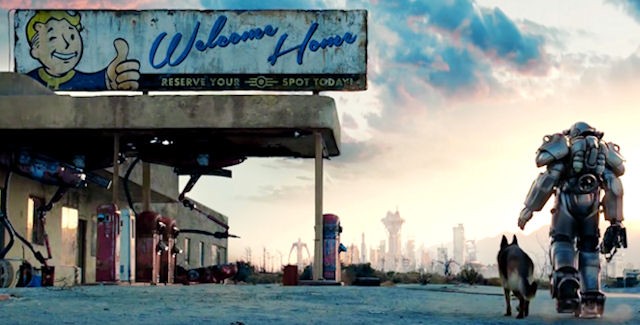 Fallout 4 developer Bethesda Game Studios’ executive producer Todd Howard has dropped Fallout 5 hints in an E3 2015 interview during the Fallout 4 reveal that seem to be a subtle hint at a future sequel!

During the reveal press conference he discussed possible future routes the studio could take. To quote:

“I wouldn’t say we want to alternate [between Fallout and Elder Scrolls], per se. We have lots of ideas.” -Fallout 4 producer Todd Howard

“I wouldn’t say we want to alternate [between Fallout and Elder Scrolls], per se. We have lots of ideas. We don’t want to get a ton bigger. We only have eight more people on the team than when we did with Skyrim. But we want to do more stuff, and I think, if you look at Fallout Shelter, that’s an example of us doing something else. So I think going forward there are more things we could do, but we’ll see what happens.

We’re like anybody else. You have tons of ideas over time, and it’s just a matter of which one you decide to put your full effort behind. But, I don’t think we’d go out and get another IP, given what’s out there and who we are. You never know, though. I’m not making any demands like, ‘Go acquire this’.”

Before the developer can get started on Fallout 5, they first need to get their Fallout 4 Season Pass DLC out the door, presumably throughout 2016. Here’s what he said about it before Fallout 4 launched:

“We’ve always done a lot of DLC for our games. We love making them and you always ask us for more. To reward our most loyal fans, this time we’ll be offering a Season Pass that will get you all of the Fallout 4 DLC we ever do for just $30. Since we’re still hard at work on the game, we don’t know what the actual DLC will be yet, but it will start coming early next year. Based on what we did for Oblivion, Fallout 3, and Skyrim, we know that it will be worth at least $40, and if we do more, you’ll get it all with the Season Pass.

Thanks again to all of you! The support and excitement you’ve given Fallout 4 has blown us away. It’s energized us even more to do everything we can in these final months to make this our best game yet. We absolutely can’t wait for you to play it, and share your adventures with us and each other.”

Although in one of the Fallout 4 endings players could achieve peace, which might suggest a sequel could include further undiscovered Vault adventurers.

Haven’t seen all the endings yet? Ignoring the funny ending you get after 1 minute if you don’t go into the Vault when the nuke drops at the start of the game; Take a look at this video that shows all 4 choices between The Brotherhood, The Institute, The Railroad or The Minutemen:

In that adventurer spirit, here’s Fallout 4 come to life in this live-action “The Wanderer” trailer:

I imagine the Fallout series could go on decades, especially with the increasing sales with each incarnation. Fallout 4 sold over 12 million copies at retail in its first 24 hours on sale worldwide, netting the company a cool $750 million at the game launch on November 10th, 2015. Making it the studio’s fastest-selling title, the best-selling officially still being Fallout 3’s 12.4 million life-time sales. Although considering in how many digital discount deals on Steam, Xbox Store & PlayStation Store the game has been included in, it may be on its way to double those multi-million retail sales by now.

Starting early 2016, Fallout 4 DLC will come out through a $30 Season Pass promising multiple expansion packs for fans to play into the foreseeable future.

What are your suggestions for Fallout 5?