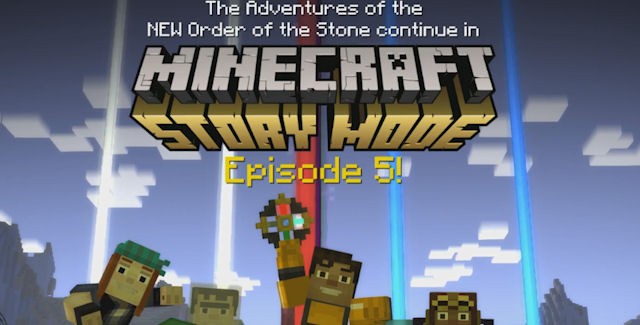 What is the Minecraft: Story Mode Episode 5 release date? On average Telltale Games has released the Minecraft episodes in a much more rapid fashion than their other episodic games, so you can expect a new downloadable episode every 2 to 4 weeks. Note that as a big surprise Episode 2 only took 2 weeks to arrive, because it was planned to coincide with the retail disc release of the game. The season finale may take 2 weeks longer to make than the rest due to the Christmas Holiday. As such, Episode 5 (titled “Order Up!”) will arrive much later than expected on March 29th 2016.

Check out the Episode 4 ending that will lead into Episode 5 in this video:

UPDATE: You can view the full episode in our Minecraft: Story Mode Episode 5 Walkthrough.

Episode 5 Synopsis: “As the New Order of the Stone, Jesse and his/her friends must help and lead the world as role models.

Jesse and his/her friends have saved the world from the devastating three Witherstorms. Peace and quiet has returned… or has it? What will be next for our heroes in the season finale? The adventures of the NEW Order of the Stone continue in Episode 5!”

Episode 5 Hints: Telltale has been quoted as saying: “If Episode Four will end the story of the Wither Storm, what does that mean for Episode Five? We wouldn’t dare spoil that for you here, but you can expect to have a better idea of what’s to come for the Order of the Stone after playing Episode Four and when the mysterious fifth episode launches in early 2016.

Episode Four’s epic ‘Wither Storm Finale’ will turn the page on one chapter, before adventures may begin anew…”

Update February 5, 2016: Since the Telltale Blog usually updates with the first trailer the Friday before the next week’s release, we should expect Episode 5 has been delayed beyond February 9th into late February or even March. No clue why after 4 episodes being released within weeks of each other, suddenly the last episode has to take 2 to 3 months. But that’s where we’re at, once again without a discernible release pattern, patiently waiting… No inside source this time either, sorry folks.

Apparently all we got officially confirmed so far is that Episode 5 will be awesome.

"I remember that punk!"
Sitting in on @peeweeherman's VO session w/ @arthurvonnagel. @Minecraft: #StoryMode Ep5 is going to be AWESOME!

Update March 8, 2016: Telltale’s Director of Creative Communications, Job Stauffer, has confirmed via his Twitter account that Episode 5 of Minecraft: Story mode will arrive in March 2016!

Awesome! Thanks so much, @MarthaPlimpton! On that note – @Minecraft: #StoryMode Ep 5 arriving later this month! https://t.co/yZUVG0toig

To quote the press release: “The adventures of Jesse and the NEW Order of the Stone are set to continue this month! In the first episode since the Wither Storm finale, Minecraft: Story Mode Episode 5 – ‘Order Up’ will be available starting March 29th on PC/Mac, Xbox One, PlayStation 4, Xbox 360, PlayStation 3, and iOS and Android-based devices.

Today we can also reveal that ‘Order Up!’ won’t be the last players see of Jesse, as Episode Five will bridge the gap between the Wither Storm story arc, and three all-new adventures that will continue as post-season episodes set to release in the coming months of 2016.

In the upcoming Episode 5, on a tip from Ivor, Jesse and friends head to an abandoned temple holding mysterious treasures. Ambushed by former Ocelot Aiden and his crew, our heroes find themselves in an entirely new world: Sky City! As they explore, the Order finds that resources are at a premium, and nothing but ‘The Void’ exists below the known world. When Aiden convinces Sky City’s ruler that the New Order of the Stone are up to no good, you’ll need to make some tough choices to clear your name, and keep Aiden from destroying an innocent world.

The cast of Minecraft: Story Mode also continues to expand as Jesse, played by Patton Oswalt (Ratatouille) or Catherine Taber (Star Wars Rebels), join Ivor, played by Paul Reubens (Pee-wee’s Big Holiday) and the gang on a trip to the skies. They’ll meet a growing cast that includes Sean Astin (The Goonies, The Lord of the Rings) as Reginald, the loyal Captain of the Guard, Jim Meskimen (Parks and Recreation) as the rebellious Milo, and Melissa Hutchison (The Walking Dead: A Telltale Games Series) as the Founder of Sky City.”