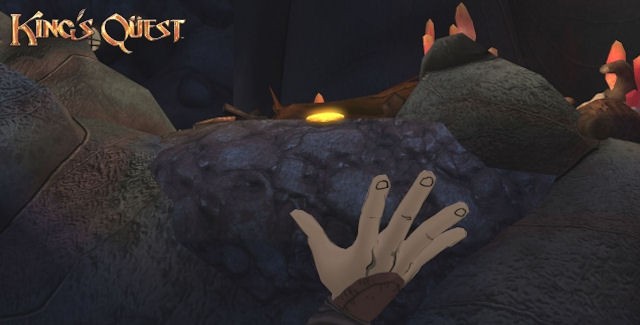 Finding all 4 Gold Coin locations and picking them up will help unlock the following Achievement / Trophy:
* “The King is in a Cent” (20 Gamerscore / Bronze Trophy) — Get all gold coins in Chapter 2.

The Timeline for all these in-game Gold Coins locations is listed below.

Where to find all Gold Coins in King’s Quest 2015: Chapter 2? The in-game collectibles locations for the Gold Coins are described in this detailed video guide by Zoidberg.

The Gold Coins are listed in the step-by-step video, in the order that they appear chronologically.

Timeline in minutes for the Gold Coins Locations Guide:

• [between 16:40 & 23:30] — Gold Coin Location #1: On Chores Duty Day 2. Eat the meat, so you’ll have enough strength to lift the Frying Pan Sword (Contraband) from the stone pedestal holding it (on the most-right cliff with the green glowy orbs on the cave walls). Then (after following the pink glowy orbs on the cave walls) give the sword to Amaya Blackstone (voiced by Zelda Williams) in her cell, then after you choose to, she’ll take out the goblin on the right first; Who will drop the Gold Coin he’s tossing into the air. Then quickly pick up the Gold Coin from the ground before the guards take you back to your cell.

• [between 34:00 & 35:20] — Gold Coin Location #2: On Chores Duty Day 4. Eat the meat (for a second time), so you’ll gain full strength to unscrew the three bolts from the big porridge pipe in your cell. Climb into the pipe and follow it until it exits in the cell with the hay bails pile to find a Gold Coin to the right atop a bucket with hay.

• [between 30:00 & 36:10] — Gold Coin Location #3
A) On Chores Duty Day 3. Bring the meat to the elderly Muriel & Chester Hobblepot, so they’ll have enough strength to make a potion.
[At 30:00 minutes] Chester tosses out the Weed-Growing Potion in a blue bottle from their cell, pick it up to enable yourself to grow weeds higher up the central cave’s middle wall (walk straight forward instead of to the sides).
B) On Chores Duty Day 4.
[Then at 36:00 minutes] The next day, go back to the growing weeds in the central cave’s middle wall to see they have grown to the top, allowing you to scale the wall. At the top platform you’ll see the missing Gold Coin lying next to two photo frames, waiting for you to pick it up.

• [between 42:00 & 43:30] — Gold Coin Location #4 On Chores Duty Day 5. Bring the meat to the actual intended giant mole it was intended to feed. Directly from outside your cell enter the small door to find the meat-eating mole and give it the meat to distract it, which gives you access to the treasure chest in its cell. Inside the treasure chest is a Wooden Chair. – Go back outside and climb the circular chairs to get to the central cave, where you must cross to bridge to the right and stop right after crossing the bridge to find a wooden children’s horse. Place the Wooden Chair on top of the white children’s horse for you to step on them and gain enough height to reach the Golden Coin on the rocks above!

I hope these tips helped you get all of the Gold Coins hidden in the game.

Please check out our other “How To” guides listed at the top of this page to enjoy King’s Quest 2015: Chapter 2 more! 😀

Huge thanks to UKGamingNetwork for the guide video and tips.

Please comment if you have any additional King’s Quest 2015: Chapter 2 Gold Coins location tips of your own, we’ll give you credit for it. – Thanks for visiting!