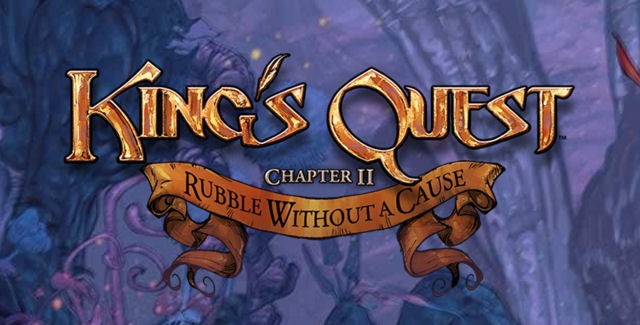 The King’s Quest 2015: Chapter 2 walkthrough will guide you through the beginning to ending moments of gameplay with puzzle solutions and strategy tips for this episodic adventure game on the PC, PS3, PS4, Xbox 360 & Xbox One.

Let’s start the “King’s Quest 2015 – Chapter 2: Rubble Without a Cause” walkthrough with an intro video followed by a full perfect playthrough!

Chapters Download Note: If you bought the “King’s Quest: The Complete Collection” or “Season Pass”, DO NOT repurchase this new chapter or you will be charged again.
“King’s Quest – Chapter 1: A Knight to Remember” is required to play this content & is sold separately.
Future chapters can be downloaded from in-game upon individual release throughout 2015 and 2016.

Intro: How To Save Everyone

How To Save Every Human Prisoner: If you don’t want to lose any townsfolk in Chapter 2; Follow this next (separate) step-by-step visual guide to find out how to save everyone (except for Mr. Fancycakes) within 50 minutes!

For the per section Part approach, continue with the regular guide…

Story Synopsis: King’s Quest – Rubble Without A Cause is the second of five chapters in the new, critically acclaimed reimagining of the classic King’s Quest game series. In this latest adventure, King Graham takes players back to his first test as ruler of Daventry. When a mischievous horde of Goblins takes his kingdom hostage, a newly crowned & woefully unprepared Graham must rise up to free his people & prove himself the leader he was destined to become.

Will Graham & his friends unearth a way to escape their rock-brained captors? Will he take for granite everything he learned as an adventurer? Does he have the stones to reclaim his mantle & lead his kingdom to safety? Will the hat make it out ok? It’s time to tell your story…

The new king meets with Olfie after getting bored by his King’s duties, then later suddenly gets kidnapped by Goblins and forced to finish all their daily chores.

Find Medicine for Bramble who is sick, found the missing ingredient eyes of flies. This guide further explains how to catch Flies, how to get the Free the Frog puzzle solved, and how to find the Goblin its prince.

Tip: You need to be careful when you eat the meat, and make sure you don’t let anyone starve or you may miss some Quest.? – So preferably don’t eat the meat yourself at all, so everyone else gets their fill and survives.

Find flour to make Sweetycakes, Find wood for furnace. Location of Chunder Blossom, find Gold Coins. Buy the Last Bowl of porridge with Branberries.
Notably, the video guide shows the location of the Small Key for the Locked door. And where to find a Long Handle for a Blade.

Hint: If you let the girl in that room starve you get the 2nd Gold Coin the little goblin plays with (not the one from the tower) and a Key.

Graham must find these ingredients: Wilted Rose and Pea. Next, find the Song for the Music Box Puzzle. He figures out how to prepare the Chumber Blossom. And Muriel brews up a Bone Bomb.

Find a Light to Fuse Bone Bomb. Find the Glass Slipper, fuse the Bone Bomb. The Bolt Cutters location is shown, and free Bramble get her across
the Stone Pillars. Finally, seek an audience with the Goblin King.

See The EPIC conclusion to “Chapter 2: Rubble Without a Cause” of King’s Quest.

Coins & Pages Tip: Do you want to find all the gold coins and pages in Chapter 2? Check out our full guides for both collectable types listed at the top of this page!

Thanks to Sierra, GamerrZombie, UKGamingNetwork & Saskia for the walkthrough videos.