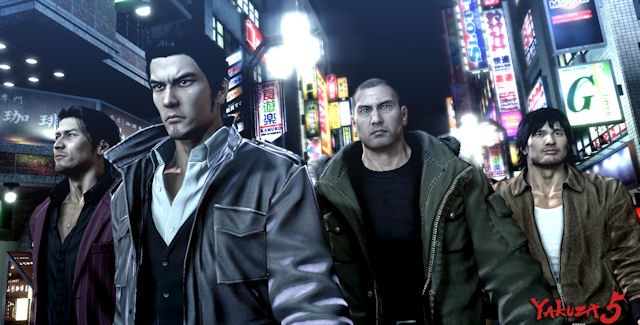 The Yakuza 5 trophies guide lists every trophy for this PS3 action-adventure game and tells you how to get and unlock them.

2. No Easy Way Out (Bronze) — Completed Normal Mode without dropping difficulty to Easy

A) For Akiyama’s portion, use the 3X Square, 3X triangle combo, which is able to keep Amon 1 in a stun loop that takes time but works. Giving Amon time to attack is a bad idea.

B) For Saejima, use the same strategy at the first attempt, but since there were so many clones I had to find more distance before charging the lariat. Simple square triangle combos work the best.

C) For Shinada, his fighting style is very cumbersome and mostly useless against someone tough, especially Amon. Buy guns and fire carefully, you will see him reflect several shots I fire at him.

D) Kazuma has the longest section, since Jo Amon will go into rage mode a lot and he is invincible. Try to avoid his attacks by running circles in the arena. When he starts lighting the ground on fire, watch closely and try to do a quick dodge roll as he charges, he gets more aggressive and a single attack can lead into a huge combo of damage. He has the same combos and moves as Kazuma, so look for the combos and Tiger Drop (R1 + Triangle) as often as possible. You will see Amon Tiger Drop me a few times as well, which do big damage.

Note: This fight will earn you the golden gun as well as Amon’s Sunglasses, which boost attack power of equipped weapons.

This is the Jo Amon and brothers battle in the bull fighting arena:

9. Sightseeing Dragon (Bronze) — Shot a picture of at least 1 tourist spot in each city

11. Thrilling First Date (Bronze) — Took a hostess on an after-hours date in the real world for…

How to go out with a hostess: After you build up the love meter with a hostess at the club, they will contact you and meet up for a date. From there, the events will unfold naturally, and you’ll be able to max out their love meter and complete their stories.?

12. Life is about Learning (Bronze) — Completed a training mission with each master

13. Reaching the Limit (Silver) — Raised all player characters to level 20

14. The Chosen One (Bronze) — Completed your first Victory Road event

Saejima’s Revelation: Easily Marketable. Why don’t we have this game?

18. Singled Out (Bronze) — Won 100 fights that enemies picked up with you town

32. First-Class Entertainer (Bronze) — Played all the routines in Comedy Team

33. King of Cochin (Bronze) — Won the Cochins Cup Classic for the first time

35. Benevolent Dragon (Bronze) — Sent a total of 5 million yen to Sunshine by ATM

36. Good Communicator (Bronze) — Struck up a conversation with townspeople a total of 50 times

37. Welcome to Nagasugai (Bronze) — Visited Nagasugai for the first time

43. Thanks from the Staff (Silver) — Completed Finale

52. A Bond Between Dancers (Bronze) — Settled things with Akari at the Dance Battle Summit

53. End of the Line (Bronze) — Won the final showdown against Shirakawa

55. A Toast Together (Bronze) — Finished the final hostess club event and made a toast with…

56. Useful Features (Bronze) — Checked the additional info for the first time when a tip appears

57. Watch for Cars (Bronze) — Hit by a regular car in Adventure Mode for the first time (excluding special content)

Special thanks to Sega & Quinntendopower for the list, tips & guide videos.

Please comment if you have any Yakuza 5 trophy unlock tips of your own. Kudos will be given. – Thanks for visiting!