Yakuza 5 Localized In English & Released Digitally. OUT NOW for PS3. Priced At $40 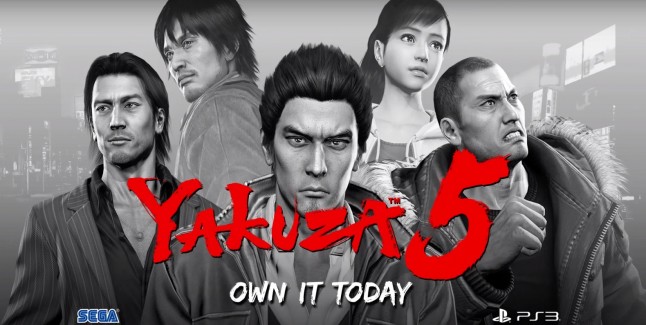 Yakuza 5 is OUT NOW on the PlayStation Store for PlayStation 3 at a cost of $40. In a surprise move at Sony’s PSX conference, the localization of this long-awaited, once-thought-cancelled title is finally playable in English and available for purchase NOW on PSN!

Check out this fantastic launch trailer for Yakuza 5.

YAKUZA 5 SYNOPSIS
The legendary dragon returns to the criminal underworld of Yakuza. Kazuma Kiryu, once known as the Dragon of Dojima, was living a quiet life as a taxi driver in Hakata after severing all his ties with the underworld.

However, at the dawn of the bloody war between the Tojo Clan and the Omi Alliance, Kazuma is forced to accept his inescapable fate and returns to a life filled with crime and violence to protect his loved ones.

Yakuza 5 also features “Another Drama” which is a series of extensive sub-plots that focus on each protagonist.

The battle system and customization system have been enhanced from Yakuza 4 and various mini-games are available in the well-known locales from the series including infamous night clubs and popular CLUB SEGA locations.

It is REALLY GREAT to see Sega & Sony finally bring the latest installment in the Yakuza series to Western fans, who have been clamoring for it for years.

It has taken exactly three years for Yakuza 5 to hit the West, many thought it would never come, especially after the “mid-November” original release date for 2015 came and went…

But finally fans can dive into it!

Check out the Yakuza 5 & Yakuza 0 announcements from the PlayStation Experience keynote address! (Skip to 1:05:00 in the video)

Hopefully Sega & Sony will now bring the Yakuza 1&2 HD Remaster to the PS3 and/or PS4, as well as the upcoming Yakuza Kiwami (in development for PS3 & PS4), which is a complete remake of Yakuza 1, but with the modified, vastly improved combat system of Yakuza 5 and all-new features.

Yakuza 6, the next core entry in the franchise, is also currently in development exclusively for PS4. The previous game that hit the West meanwhile was Yakuza: Dead Souls back in 2012.

Buy this game if you are interested in Yakuza! It will spur and encourage the developers to bring the rest of the games to the West! And Yakuza is a criminally (see what I did there) underrated series.

Here’s the Yakuza 5 image gallery.
Click on any of these image thumbnails to see the full-size photos: 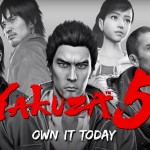 Yakuza 5 in English is officially out now for PS3 via PSN!


How excited are you about finally being able to play the Yakuza 5 in English on PS3?