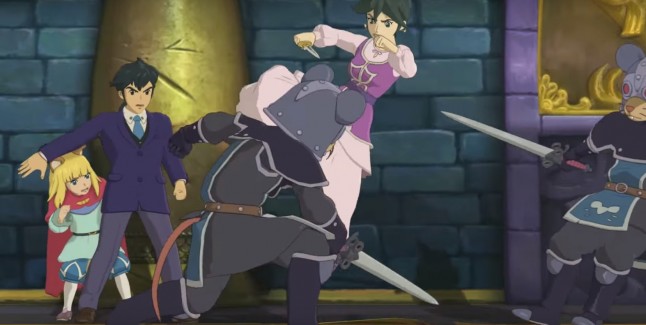 Ni No Kuni 2: Revenant Kingdom has been announced exclusively for PS4! Although the game will debut on PS4, Sony’s Shuhei Yoshida confirmed that the game will only “debut” on PS4, and thus there is the possibility it MAY come to other consoles later on.

Check out the debut trailer for Ni No Kuni 2 from the 2015 PlayStation Experience.

Absolutely no details on the game have been announced outside of what can be gleaned from the above trailer.

I’ll leave that to fans of the series.

The game does not have a release date, nor do we know if Studio Ghibli is directly involved, although I’d imagine they are.

Part 2 will once again be developed by Level-5, who created the original Ni No Kuni: Wrath of the White Witch, as well as the still unreleased in the West DS original, “Ni no Kuni: Dominion of the Dark Djinn”.

Level-5 are also the developers behind the Professor Layton series for DS/3DS, Sony’s PS3 RPG series White Knight Chronicles & Sony’s PS2 Dark Cloud series (which could definitely use a revival!).

Although Ni No Kuni: Wrath of the White Witch was exclusive to the PS3, it appears Level-5 may want to branch the series out to multiple platforms to reach more people (especially given that this is a Studio Ghibli project, so it makes sense to reach a broader audience) and thus is leaving the door open for the sequel.

I never played the original Ni No Kuni: Wrath of the White Witch game, but I heard nothing but great things about it. It’s definitely atop my list!

We need more heavily anime-influenced JRPGs of this sort on next-gen consoles, so I’m super happy to see Ni No Kuni 2: Revenant Kingdom get announced!

I hope this game gets a really cool Collector’s Edition, and I’d really like to see it hit other platforms including the Xbox One, Nintendo NX & PC.

Now when will Level-5 and Nintendo finally release the DS game?… DO IT FOR 3DS!

What do you think about Ni No Kuni 2: Revenant Kingdom?