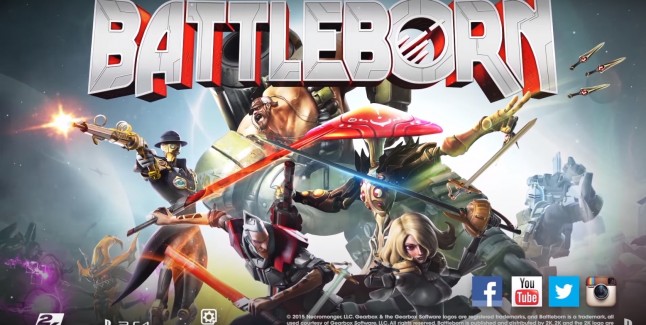 Battleborn has a release date of May 3, 2016 announced developer Gearbox (makers of Borderlands) at Sony’s PSX (PlayStation eXperience) expo; where it was also revealed that PS4 will get an exclusive post-launch character; And will get exclusive access to Toby, the all-new Penguin hero in a mech-suit, during the open beta. Battleborn will also be released for PC & Xbox One.

Check out this badass new PSX trailer for Battleborn!

Gearbox also reassured everyone that Battleborn, a hybrid MOBA (Multiplayer Online Battle Arena, games like Defense of the Ancients [DoTA] & League of Legends) FPS will also include a HUGE single-player campaign game that can be played with one-player or cooperatively!

Not only will Battleborn feature all of the quirky humor Borderlands fans expect, but the game will fully embrace split-screen couch co-op as well!

As you might expect, the beta is coming FIRST to PlayStation 4 in early 2016. In addition to getting an all-new Hero, which brings the PS4 character roster to an impressive 26; the final 26th character will exclusively be available only for PS4 and ONLY to those who participate in the open beta. So you better get ready to jump in!

A tremendous band of badass heroes fight to protect the universe’s very last star from a mysterious evil in this next-gen shooter by the creators of Borderlands.

To defend it, you’ll need to utilize every type of character and weapon you’ve ever imagined — from cyborg hawkmen to samurai vampires to mini-gun wielding man-mountains.

Slash and parry, run and gun, cast and dash, or simply obliterate foes all while building and growing your personal team of heroes.

Choose your hero and fight alone or co-operatively alongside friends in story missions, or battle against them in fast-paced competitive multiplayer matches.

* Story Mode: Fight alone, or co-operatively with friends, to save the last star in the universe from a mysterious evil hell bent on its destruction.

* 25 Characters: Take control of 25 vastly different heroes, each one with their own personality, equipped with unique weapons and powers.

Check out the full details on Battleborn from PSX from Randy himself (skip to 36:15 in the video).

It will be greatly interesting to see if Battleborn can match the excitement and sales that the powerhouse Borderlands franchise reached.

Remember, Borderlands was greatly panned and analysts did not think the game would be a success prior to launch. Boy were they wrong.

I’ve never played a MOBA myself, but watching this Battleborn trailer, I was greatly impressed.

It’ll be interesting to see if Battleborn can grow the MOBA pie beyond it’s normal PC reach thanks to Battleborn’s console-focus and the trusted name of Gearbox.

Are you excited about Battleborn? Are you planning on playing the Open Beta on PS4?