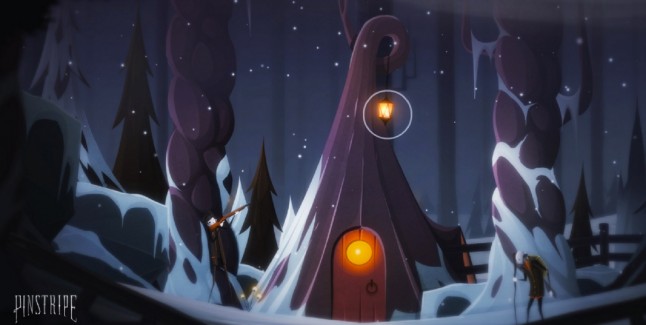 Pinstripe is the name of an all-new Indie Adventure game being entirely crafted by ONE MAN. His name is “Thomas Brush”, and true to his last name; His upcoming Steam title (Made with Unity) paints a world of bold, stylistic, beautiful graphics all wrapped up in an emotionally-gripping tale of an ex-minister who finds himself in an eccentric HELL; on a mission to save his lost daughter. It’s a story of loss, faith, doubt, self-determination, and eventually, redemption.

Check out this beautiful documentary from the 2015 Game Awards, detailing Pinstripe.

There isn’t a lot to say about this gorgeous, intriguing one-man game (Thomas, all on his lonesome, created everything from the music to the graphics to the art to the design to the script to the coding!), that hasn’t already been said in the video above.

You can pre-order Pinstripe now, and score a free official soundtrack, at Atmos Games.

Here are a few thoughts from the developer, read more in his blog post.

“While all of this is wonderful in theory, I’m often tempted to give-up on the whole lone-wolf thing. To be sure, I have a folder full of unsent emails to potential artists, musicians, etc. But in the end, the benefit of being sure my vision is carried out has always been a priority.

In my case, this is most easily achieved by just biting the bullet and doing it alone. By way of example, I tend to think music is the life-blood of a game. If the music doesn’t fit the artistic style and mood of a game, the experience can become disorienting.

The illustrations in Pinstripe are distinct, and having to communicate how the music should correlate to this style would have been very difficult for me. Not impossible — communicating ideas is how the video game industry works — but difficult, especially for me.

My concern for budget, time, and my picky personality meant it would be best to take a couple months and just write the music alone. I realize this comes across as egocentric, but the end goal has always been to make a cohesive game that connects on an emotional level with the player.

Edge Wood is a prime example of this process. Edge Wood is the first level in Pinstripe — it’s cozy and snowy, but also in the middle of Hell.

I’m not quite sure if this setting will jive with players, but I like to think that with the right music, art-style, and atmosphere, any setting, no matter how bizarre, can work. After four totally different songs written for Edge Wood, three art-styles, and varying sets of characters that were eventually nixed, I feel Edge Wood has reached a point where it emotionally clicks.

It was a lengthy process, but the outcome was worth it, and I feel pretty good about it. I imagine this directionless back-and-forth would cost a lot with contractors, and a lot more when working with close friends. I’m sure this is one of the major reasons indie dev teams tend to fizzle — some starving artist is trying to change the world with a video game, and can’t seem to make up his mind about the first level of a game. Conversely, without a team, the work-load is heavy, but the burden is often light, leaving room for creativity and personality.

When it’s just me, a cup of coffee, and a couple ideas in the early morning before I head off to my day-job, a personal game like Pinstripe has the opportunity to become something more than just me.

Sure, my small two hour game has taken almost three years to make, but I’m hopeful players will someday thank me for it. Stylistically, musically, and narratively, Pinstripe is from my heart.

It has a distinct beat that I think is much more likely to influence players on an emotional level than if I had asked for help.” – Thomas Brush

Check out this gorgeous Pinestrip gameplay trailer, which gives you a lot more information on how Pinstripe actually plays.

Everything about this game is extremely intriguing.

We need more games that deal with faith and issues of eternity, salvation, death and all the themes that are interwoven throughout Pinstripe. This is the kind of stuff that appeals to a much wider audience than just gamers.

I love the fact that Thomas Brush (that name can’t be real… Can it? :P) is making a game that is less about gameplay (although it looks to have that in spades) and more about an experience meant to shake the player to the core, cause them to ponder, and leave a lasting impression on their soul.

These are the type of artistic designs that Indie Gaming was made for.

This is what I wish I would see more of from mainstream, AAA game designers.

Let’s hope everyone is taking notes.

I certainly expect this game to sell millions. 🙂 One can only pray.

Will you be buying Pinstripe now that you’ve heard Thomas’ story?