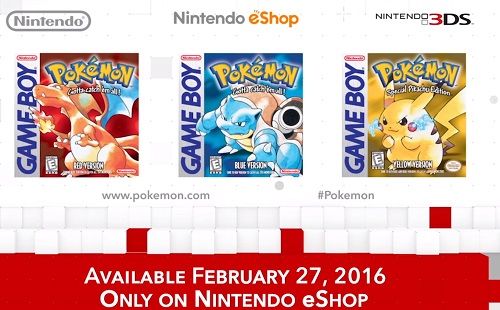 Pokemon Red, Pokemon Blue AND Pokemon Yellow will be re-released for 3DS eShop on February 27, 2016! These are the original games in their exact original black & white Game Boy forms! Except, these new versions will have built-in local wireless Wi-Fi Trading & Battling capabilities (but no Internet trading YOU CHEATER!) so that pesky Game Boy Link Cable is no longer needed!

Check out this gameplay trailer for Pokemon Red/Blue/Yellow Versions for 3DS!

It’s very exciting to learn that Pokemon is coming back, and nearly 20 years since they hit the original Game Boy in Japan in 1996 (19 years to be exact, 17 years in the U.S.!).

It is unknown whether or not these games will be exact ports, or whether they will contain any kind of enhancements.

Technically they are NOT direct ports, since Nintendo had to actually go into the code and change it, to make the game’s work with 3DS wifi for Trading & Battling, instead of the Game Boy’s Link Cable…

But did they change anything else?

Many people are wondering whether Nintendo hid Mew under the truck, and whether the Missing No./Mew glitches will still work… Or whether it will be possible to get Mew AT ALL in these games…

You’d expect that Nintendo would take advantage of these digital re-releases to offer some fun new promos, like giving Mew away.
And/or hiding some Easter Eggs in there, like finally making “MissingNo.” an official Pokemon, and/or allowing Mew to be obtainable somehow via Amiibo or something…

Also, what about “Surfing Pikachu” & the Surfing Pickachu minigame in Yellow? “Pikachu’s Beach” and Surfing Pikachu were ONLY available in Pokemon Yellow by using Pokemon Stadium for Nintendo 64 and its Transfer Pak to transfer Pickachu with the Surf ability to Yellow…

Will that feature just simply be completely absent/unobtainable?

It’ll be interesting to see if Nintendo has done any kind of lil “tinkering” with these games…. 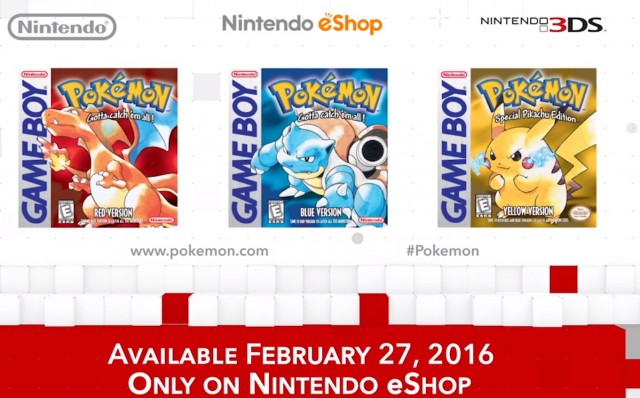 Trio of our childhood!

This is AWESOME news.

Hopefully Gold/Silver/Crystal and the entire rest of the series will come soon as well!

Nintendo is just SITTING on a mountain of cash that they could earn by re-releasing these classics digitally in their original forms for 3DS/Wii U! What are they thinking? Hopefully they’ve wised up!

Just recently, I actually played through the ENTIRETY of Pokemon Red. And I did so on a Game Boy Advance SP (and sometimes on my GameCube Game Boy Player) using an actual Pokemon Red cart that I’ve had since childhood (Red was my brother’s, meanwhile Yellow was mine).
I used a Game Shark GB to save my brother’s old progress… and then delete his save file and play it anew.

People told me that Pokemon Red/Blue & Yellow were essentially “unplayable” because they were so outdated. I was told that the games were horrible, incredibly sucky, no fun and didn’t stand the test of time.

These folks COULD NOT HAVE BEEN MORE WRONG.

I loved every waking second and I caught literally every Pokemon in the game except SIX of them (this includes Mew which I caught, or was gifted rather, way back in 1998 during the Mew Event. So Mew remains on my Yellow cart and my bro’s Red cart).

The other two starters require another copy of the game (and I don’t have the ability to delete my Yellow data to restart… since I don’t have a second Game Shark GB, which allows you to save one “Save State” in its battery)…

Whereas I chose Kabuto/Kabutops and thus wasn’t able to access Omastar whom you get halfway through the game. So that too would require a 2nd/3rd/4th restart.

Other than the above, I 100%’d the game which was such a great feeling.

The game was TOUGH, and very interesting. It is not an easy game by any stretch.

Keep in mind that I played the game without using a strategy guide, nor by looking up Pokemon online. This a trend I also did with Pokemon Y… Where I did not use a strategy guide NOR did I look any Pokemon up online. So as to keep the surprise aspect intact…

And to this day I will discover new Pokemon and new evolutions in Pokemon Y that I didn’t know existed!

This is a feeling that can’t be replicated once you already know the Pokemon & evolutions, but it is the type of play that the creators originally intended. That sense of surprise and “wonder” is one of the best things about Pokemon…

An aspect that is sadly ruined given our culture of instant-information and tendency to want to “spoil” and “know” everything before-hand. FOR SHAME!

I still intend to play through Pokemon Gold/Silver/Crystal and Pokemon Yellow (as well as the rest of the series…), perhaps actually on Game Boy/Game Boy Color.

Since the only Pokemon games I’ve ever played were Yellow & Y (Big stretch, I know). I plan on doing a “Master Run” this time if I play Yellow… By only using six Pokemon or so (or perhaps under 10 throughout the game from beginning to end…)

However, now that they are available digitally on 3DS soon… I may just perhaps take that route…

How excited are you to see Pokemon Red, Blue & Yellow back in the modern age!?