Dragon Quest VII: Fragments of the Forgotten Past 3DS Remake Announced For Summer 2016 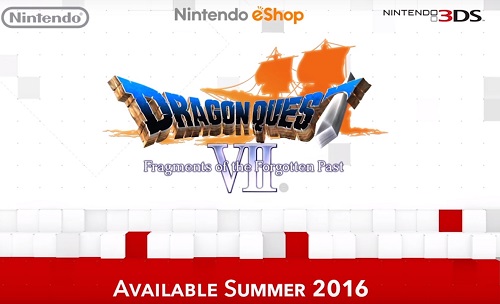 The PS1 game Dragon Quest VII is being remade for the 3DS in Summer 2016, re-titled as “Dragon Quest VII: Fragments of the Forgotten Past”. The original game for PlayStation hit America in 2001 and was one of the final titles for PS1 console. It was a MASSIVE quest that could take well over 100 hours to complete; but even then, it unimpressed with early-polygonal graphics that many said could’ve been done on Super Nintendo. Now the game has been completely remade with modern polygons and reworked for play on the 3DS.

Check out the video announcement of Dragon Quest VII for 3DS at 39:10 minutes.

The remake includes new sections where you’ll be required to solve the game’s many puzzles by making use of the 3DS touchscreen.

Check out a trailer for the Japanese 3DS version of the game.

Dragon Quest VII for 3DS hit Japan WAYYY back in 2013.

It’s been a long three years, but Square Enix has answered the plea of many fans with this announcement. The game was oft-requested and many thought the 3DS remake would never hit Western shores. So this is another huge GET for the 3DS & JRPG fans.

As mentioned above, the game is absolutely massive, and the original version for PS1 featured over 70,000 PAGES of text, which took 20 translators and five copy editors over a year to translate.

Due to the sheer scale of the game, that’s definitely got to be part of the reason why it took them so long to bring it to America. It will likely have a completely new translation from the PS1 original for the 3DS remake.

Check out this Let’s Play of the Japanese version, complete with English fan-translation, in action.

DRAGON QUEST VII SYNOPSIS
In the World, Only This Island Is…. You plan to become a humble fisherman of peaceful Estard Island, the only land in a world of ocean. But when you discover the artifacts from an ancient land, you tear the fabric of time and unveil the world that once was. Transported to past lands, you must solve their mysteries and break the spell of annihilation. Prepare for your destiny!

A BRIEF HISTORY OF DRAGON QUEST

Dragon Quest VII is the 7th entry in the series.

Dragon Quest I&II were also remade in a two-game compilation for Game Boy Color in 2000 called “Dragon Warrior I&II” that was released in North America.

Dragon Quest III was also released on Game Boy Color in the US in 2001. The Game Boy Color remakes featured new translations, a Quick Save, and are truer to the original games than the NES American versions, and thus Dragon Warrior III for GBC was the first GBC RPG to get a T for Teen rating.

Dragon Quest IV: Chapters of the Chosen meanwhile, was released for DS in 2008 and was a remake of the NES game. This version hit iOS/Android in 2014.

Dragon Quest V: Hand of the Heavenly Bride was released for DS in 2008, and was also a remake of the 1992 SNES original. This game was never released in it’s original form outside of Japan (and the same holds true for DQIV & DQVI). The DS remake hit iOS/Android in January of 2015.

Dragon Quest VI: Realms of Revelation was relesed for DS in 2011 and was a remake of the original Japanese-exclusive 1995 SNES game. The DS remake hit iOS/Android in June of 2015…

Thus marking the entire retro history of the Dragon Quest franchise playable via Smartphones & Tablet platforms, as well as the entire series remakes playable on the Game Boy Color/DS platforms!

Dragon Quest VII was then released on PS1 in 2001 (US), then on 3DS next year in 2016. The game was also released on iOS/Android in Japan this year, so it may come out on those platforms in the West next year.

Dragon Quest VIII: Journey of the Cursed King meanwhile, was originally released on PS2 in 2005 (US) & contained a playable demo of Final Fantasy XII. It was also released for iOS/Android in 2014 in the West, and is also being remade for 3DS in 2016!

Dragon Quest IX: Sentinels of the Starry Skies is the first game exclusive to the DS, and it was released in 2010.

Dragon Quest X was the first Wii-exclusive game. An MMO, it later came to Wii U, PC, Android & 3DS in Japan… And is scheduled for Nintendo’s NX in 2016, where hopefully it will finally come to the West.

Dragon Quest XI meanwhile returns the series to it’s offline core, and is in development for PlayStation 4, 3DS and Nintendo NX. It will be released in Japan in 2016. 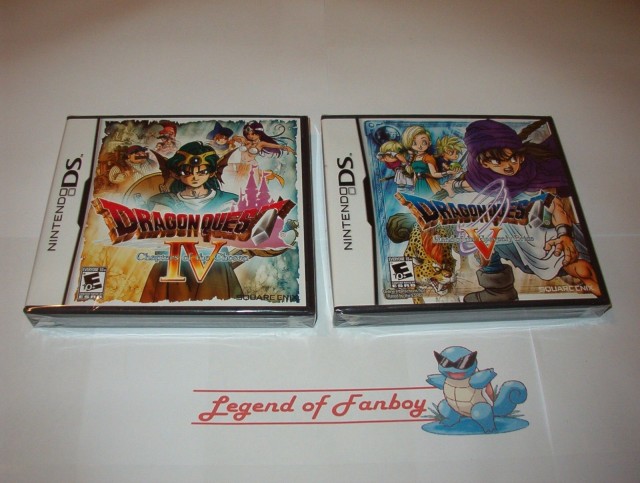 It’s absolutely fantastic to finally see Dragon Quest VII, one of the PS1’s best RPGs, come stateside and to the West!

This is a 3DS title that many fans were praying & hoping would come over… It had been three very long years, so hope was not high that we’d ever see the game’s in English.

But glory, hallelujah, praise the Lord! Here it is!

I remember reading the review and previews for this game back when it was called “Dragon Warrior VII” for the PS1. I remember them saying that not only did it have hundreds of hours of gameplay, but it also had extremely outdated graphics (and released after the PS2 came out… making it look PAINFULLY dated). Nevertheless, the game was generally praised as a long and satisfying romp for JRPG fans, even if it featured “one of the most boring beginnings of all time”. 😛

I never got around to playing Dragon Quest VII on PS1, and with Square Enix’s recent quest to remake all of the game’s in the series and release them here, this is a GREAT addition to the 3DS’ massive RPG lineup and a very satisfying move for Dragon Quest fans. Who will now have nearly the entire series playable on DS & 3DS (Remember, the 3DS is backwards compatible with all DS games!)

Are you going to be buying Dragon Quest VII: Fragments of the Forgotten Past when it hits in Summer of 2016?

Tags: Dragon Quest VII: Fragments of the Forgotten Past