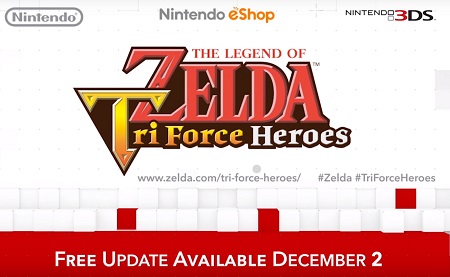 The Legend of Zelda: Triforce Heroes is getting some FREE all-new dungeon adventuring in the form of a massive new DLC that includes a huge dungeon called “The Den of Trials”, as well as two all-new Outfits, which will land in a few days on Wednesday, December 2nd.

You can see the Den of Trials dungeon in action in this video at 04:05 minutes in.

The Den of Trials is an extremely difficult dungeon. Not only does it have a whopping 30+ stages, but in order to proceed to the next stage you & your friends must kill every enemy!

Checkpoints have been added, thankfully, to make it easier to get all the way through the Den of Trails.

The former allows you to see inside of Treasure Chests before you open them, while the latter increases your offensive attack power; while also allowing you to shoot beams that spread out in four directions from your body, allowing you to easily hit enemies that surround you. Huzzah!

The Den of Trails DLC will be released on December 2nd, 2015. The Downloadable Content will be available for free!