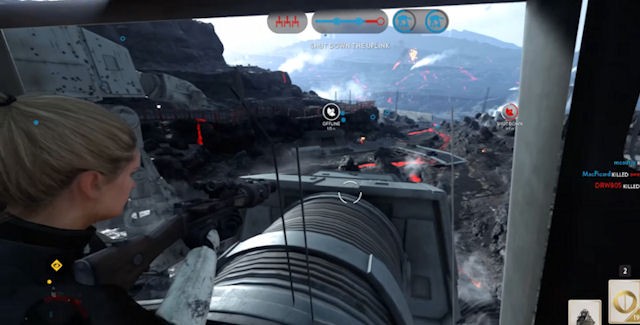 Here are some of the newly discovered Star Wars Battlefront 2015 glitches.

Note that these Star Wars Battlefront 2015 glitches can of course get patched by EA at any time. But you might encounter the here-under listed glitches for yourself in the meantime.

There’s a glitch in Star Wars Battlefront that turns you into an undefeatable killing machine!

How To Become Invincible In Star Wars Battlefront: Sometimes at random when you crash your Tie Fighter (or Snow Speeder) into the ground (or a wall) while you’re getting shot at by another player, you might become invincible, since you’re supposed to be dead from the explosion already. Your character will spawn on the ground at the edge of the map (or in the crash-site) and nothing will damage you anymore, as indicated by your missing health bar. This will obviously unfairly allow you to get a huge score!

This happens if the server is lagging while you crash your flying vehicle, as the explosion sends you flying across the map at the moment of lag, leaving you in-game without dying and thus you’ll stay invincible for the remainder of the match.

This video guide will show you this pretty easy trick to get inside of the AT-AT and use it as a giant awesome shield. – With the right gunner up there they would surely do quite a bit of damage.

How To Get Inside The AT-AT Walker: Use your jetpack to get on top of the AT-AT Walker’s head. To glitch into its cabin, walk into it and you’ll walk through the grey front-wall. If you push all the way to the back of the cabin you cannot be hit by enemy fire! Even funnier is when you stick the tip of your weapon outside of the cabin, while remaining inside it, as then you’ll be invincible and can shoot other players from afar!

Have you encountered any Star Wars Battlefront 2015 glitches?