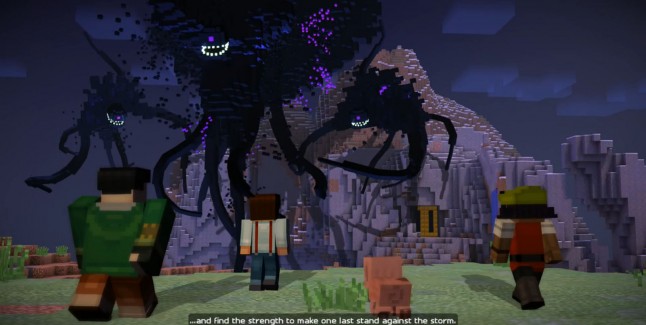 What is the Minecraft: Story Mode Episode 4 release date? On average Telltale Games has released the Minecraft episodes in a much more rapid fashion than their other episodic games, so you can expect a new downloadable episode every 2 to 4 weeks. Note that as a big surprise Episode 2 only took 2 weeks to arrive, because it was planned to coincide with the retail disc release of the game. As such, Episode 4 (titled “A Block and a Hard Place”) will arrive on December 22, 2015.

UPDATE: You can view the full episode in our Minecraft: Story Mode Episode 4 Walkthrough.

Episode 4 Synopsis: “Jesse and his/her friends are faced with a devastating defeat our heroes will have to search deep within themselves in order to rise above tragedy, heal broken friendships, untangle bitter rivalries, and find the strength to make one last stand against the storm.”

The Episode 4 chapter names hint at what events to expect:
• Chapter 1: Dramatic Timing
• Chapter 2: In a Land Far Away
• Chapter 3: It Came From Outer Space
• Chapter 4: The End of the Line
• Chapter 5: From the Jaws of Defeat
• Chapter 6: A New World Order

Check out the Episode 3 ending that will lead into Episode 4 in this video:

Update December 17: The ‘Wither Storm Finale’ trailer for Episode 4 has been released by Telltale!

Trailer Description: “With the fearsome Wither Storm more dangerous than ever, Jesse, Reuben, and the crew discover there is one thing that can destroy the command block at the heart of the monster – but they’ll need to brave the perils of the Farlands to find it. As uneasy allies and ailing friends threaten to tear the group apart, can they defeat the Wither Storm in their final battle? And what sacrifices must be made to succeed? Find out in Episode Four’s epic ‘Wither Storm Finale’ that will turn the page on one chapter before adventures begin anew in the mysterious Episode Five launching in early 2016.”

The new trailer is at the top of this page. Here’s the original teaser trailer.