Starcraft 2: Legacy of the Void Walkthrough 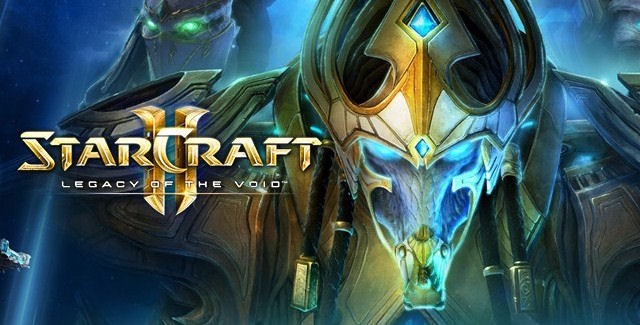 The Starcraft 2: Legacy of the Void walkthrough will guide you through the beginning to ending moments of gameplay with strategy tips for this real-time strategy game on the PC & Mac.

You are Hierarch Artanis, leader of the mighty protoss race. Years ago, your homeworld of Aiur fell to the merciless zerg Swarm. Now, at long last, you have raised a powerful fleet of warships known as the Golden Armada, and are poised to reclaim your world. But an ancient evil—Amon—threatens this destiny and the fate of the entire galaxy. Only you can reunite the protoss factions and defeat the coming darkness before it consumes all life in the sector.
.
Let’s start the Starcraft 2: Legacy of the Void walkthrough with an introduction video!

Please note that viewers must be at least 13 to 16 to watch, in America & Europe respectively, so no harm comes to those with innocent eyes. This game includes Blood and Gore, Mild Language, Suggestive Themes, Violence.

Index of Starcraft 2: Legacy of the Void Guides:

Starcraft 2: Legacy of the Void Walkthrough

StarCraft II: Legacy of the Void is the final chapter in the epic sci-fi storyline spanning the StarCraft II trilogy. Players will guide the powerful Protoss in the epic conclusion to Blizzard’s award-winning RTS series and aim to unite the three races in the ultimate battle for survival against an ancient evil threatening all life in the universe.

Featuring new units and the introduction of new cooperative and multiplayer modes, Legacy of the Void is the ultimate strategy experience and StarCraft at its finest.

Note: Legacy of the Void is a standalone product. It does not require any other version of StarCraft II to play.

Although Internet Connection is required, as well as Battle.net registration and the Battle.net Desktop Application required for use.

Intro: The Story So Far & Prologue: Whispers of Oblivion

Welcome to the Starcraft 2: Legacy of the Void walkthrough!

Note: Outside of this cinematic, you can also get more of the story before starting the main campaign from the “Starcraft 2: Legacy of the Void – Prologue: Whispers of Oblivion Walkthrough“.

In it you join Zeratul on three missions to unravel the final piece of the Xel’naga prophecy in the Whispers of Oblivion mini-campaign.

JustGameplay will be your guide showing you around the game’s map areas.

Basics: Up to 3 Probes can harvest from each Mineral Node or Vespene Geyser. Having enough workers is vital to building a powerful army.

On the Aiur Battlefield.

Hint: Defend your base with Photon Cannons. If they become damaged, use Shield Batteries to restore their shields.

On Aiur, much later… Activate the Spear of Adum to flee the fallen world.

Base Tip: Expanding to a new resource location will allow you to speed up unit production and build a stronger defense.

Strategy Unit Build Tips:
– Pre-Voidrays, build Mass Stalkers.
– Post-Voidrays, mass them, until you get the Destroyer option.
– Mass Destroyers = win.
Core options: Unit speed boost – more Void Rays, the stun ray – frozen targets for Void Rays, auto vespian extracter – your Void Rays need gas, anything in this column, then get the one that saves your unit at 1 health for 5 secs, and any bombardment. As recommended by the fan DuDuDu.

Tip: Dark Templar cannot be attacked unless the enemy has a detector nearby, such as a Spore Scrawler or Overseer.